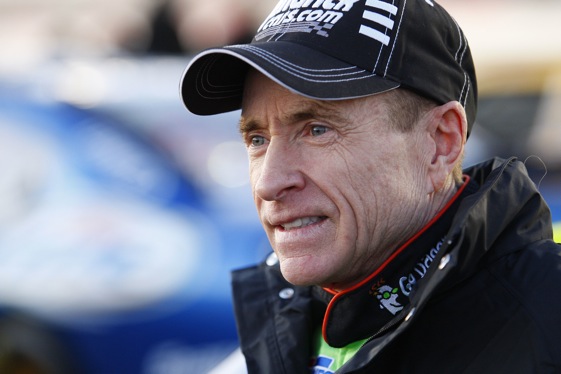 If anyone doesn’t think that Mark Martin is a proud old warrior, you better rethink that thought!  Martin made it clear last week in a very rare flare of anger after ESPN analyst, former crew chief and team owner, Ray Evernham, suggested that Mark Martin should bow out gracefully from the Hendrick Motorsports stable of drivers to allow Kasey Kahne into the #5 Chevy.

The audacity of that suggestion struck a very raw nerve in the 51 year old warrior.  An irate Martin made it abundantly clear that he will not give up his ride without a fight!  He has a contract with HMS and fully expects Hendrick to fulfill his part of the contract!  Anything less than that is totally unacceptable to Martin.

Rick Hendrick created this mess by signing Kasey Kahne to a contract that is not starting until 2012.  Granted, Hendrick needed to strike and sign Kahne early, however what is a driver of Kahne’s caliber to do for the 2011 season?  Therein lies the confusion, the rancor, and a huge logistics problem.  Hendrick has five drivers signed with the maximum of four race teams allowed by NASCAR.  No problem according to Hendrick, Kahne will join the team after Martin leaves at the end of the 2011 season!

Obviously Hendrick wanted Kahne to join his company, no matter what the cost.  However, it has been a disaster in the making from the start.  Why make the announcement in early 2010 for the 2012 season?  That announcement only fueled the fire of speculation over Kahne’s future employment status for 2011.  The collateral damage from Hendrck’s announcement has caused the waters surrounding Mark Martin to become muddied, turbulent, and infected with alligators waist deep!

In 2010, Martin’s team has struggled with their performance, adding additional fuel to the fire, and magnifying this tenuous position that Martin has been thrust into!  The outside speculation and pressure continues to mount weekly

So this is the deal.  HMS has five very talented drivers, Jimmie Johnson, Jeff Gordon, Dale Earnhardt,Jr.,Mark Martin, and Kasey Kahne, signed to drive four cars.  It doesn’t appear that Hendrick has been able to line up a ride for Kasey Kahne for the 2011 season, at this point in time.  A talented driver, such as Kahne, will not be willing to sit out an entire season waiting for the contract to become enforceable.

Therefore, having five drivers for only four race teams has put rick Hendrick into a very delicate situation.  Martin has made it very clear that he is not “expendable”, and is not going to be pushed out of the #5 Chevy!  Hendrick has been extremely busy trying to line up employment in 2011 for Kahne.  As the season starts to draw to close, the possibilities for Kahne’s 2011 season are not looking so bright!

The Kanhe signing has had many side affects within the HMS organization.  Nevertheless, you can’t fault Hendrick for grabbing Kahne when he could, even though it has turned into a car owners worst nightmare!

Hendrick’s options seems to be dwindling as the days tick off!  What is car owner to do?

What are your thoughts as to how Hendrick could solve his delicate problem?