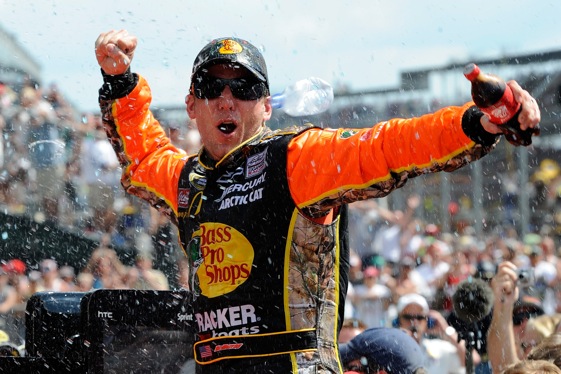 Jamie McMurray greatly increased the quality of his racing resume Sunday with The Brickyard 400 victory.  He now has joined some very good company with the likes of Jimmie Johnson and Dale Jarrett.  Johnson and Jarret were the only other NASCAR drivers to win The Daytona 500 and The Brickyard 400 in the same season before McMurray’s victory Sunday.  Series points leader, Kevin Harvick, finished second followed closely by Greg Biffle in third.

Juan Pablo Montoya led the most laps, 86, but again had fell disappointingly short when his team opted to pit for four tires while leading with 23 laps to go. Six others took two tires and that pushed Montoya back to eighth on the restart and two laps later, he crashed while scrambling to make up lost position.

This is the second consecutive year that Montoya was the most dominating race car at the brickyard 400 and failed to win the race!  Last year he was issued a “speeding ticket” leaving the pits.  However, this year Montoya was subject to his own aggressiveness trying to make up for what turned out to be a poor strategy decision on the pit stop.

Of being at his best in the big events, McMurray said, “I think it’s coincidence a little bit that we’ve run well at all those big races. After sitting on the pole at Darlington and running second, then going to Chicago with the same car, sitting on the pole, finishing fifth, we had a car that they had given all the updates to, and we were going to bring here. I asked Bono (his crew chief, Kevin Manion), ‘Any chance we could bring the same car we ran at Darlington and Chicago?’  He’s like, absolutely. We raced Chicago Saturday. I went to the shop on Monday, the car was stripped down, they were taking it in to repair it.

Many pundits thought that Jamie McMurray’s racing career was on the downward slide when Roush-Fenway Racing was forced to eliminate one of their race teams due to the new rules limiting owners to a maximum of four race teams.  That rule went into effect at the beginning of the 2010 race season.  However, with McMurray’s Daytona 500 victory, now his Brickyard 400 victory, and a near miss with Harvick at the spring Talladega race, McMurray is making the pundits “eat some crow”!

Here is the unofficial results from the 2010 Brickyard 400.

What is your take on Jamie McMurray’s performance in 2010?