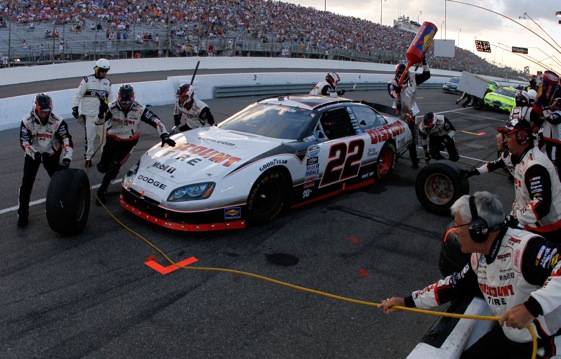 Every since Carl Edwards attempted to block “Blazingly Bad”  Brad Keselowski at Talladega Superspeedway for the win last April, and “Bad Brad” held his line, turned Edwards around, sending Edwards into the catchfence/car shredder, “Cousin Carl” has seen nothing but a red mist, smoke, and fire out of his peripheral vision!

WOMR will admit that “Blazingly Bad” Brad does push the issue often enough to raise the hackles of some Sprint Cup drivers.  Isn’t what a young Dale Earnhardt, Sr. did throughout his entire race career?  This is not meant to make any comparison to Earnhardt, however, the point is that “Brad K” has been around racing all of his life and has a pretty good understanding between hard racing and overly aggressive driving.

Unlike most veterans, Edwards seems to fail to understand the fine line between payback in kind and deliberate and dangerous cheap shots like the one taken on the front straight at Gateway to win Saturday’s Nationwide Series race. The incident tore up a lot of equipment among the competitors headed for the checkered flag behind him and luckily ended without serious injury.

For those of you who recall the intimidation tactics of Dale Earnhardt, Sr., the black #3 would never let another driver rattle him so badly and so consistently.

Edwards complains that Keselowski keeps putting him in a bad position. If he told that to the drivers who are in NASCAR’s Hall of Fame – or on their way – they might have a good laugh. The sport of stock car racing is all about putting your fellow competitor in a bad enough position that a pass is all but inevitable.

This is the second in what is now a series of dangerous cheap shots versus Keselowski. Edwards’ “chump and run” moves are distinguished by the fact that any driver, any where, on any track, in any series could do the same thing. That’s why it’s gut check time for Edwards. He needs to stop taking pride in turning motor racing into the lowest common denominator!

That is a long way from being an intimidator!

Lest we not forget that Edwards intentions to put Keselowski into the wall at Atlanta was premeditated.  Edwards’ actions might have been different if one of his Roush team mates were leading the race, been forced into a double file restart, additionally possibly putting one of them into a green-white-checkered finish!

At Gateway, Edwards knew that in a different series he would not face the same post-race management as in the Sprint Cup, allowing him more leeway despite a second high-speed run-in with Keselowski. He needs to spend more time calculating that stock car racing is not a sport masquerading as a personal vendetta, rather that it’s actually a sport.

“Cousin Carl” needs to be given a clear message that it is time for him to learn about paybacks in kind, rather than a search and destroy mission!  This is to include learning when to use a “bump and run”, preferably somewhere down the road when it is timely and needed.

So my friends, Tuesday morning, when NASCAR penalties are traditionally handed out, might provide some really good insight into the Nationwide Series director’s thought processes!

What are your thoughts regarding the Edwards-Keselowski feud?