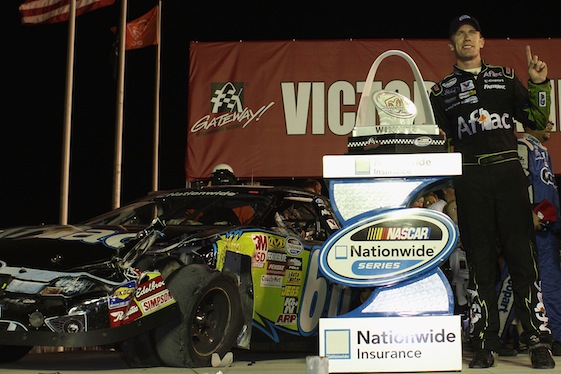 Has NASCAR reached a new low point in the new “Have at it era”? Some have already said that on Saturday night when Carl Edwards dumped “Blazingly Bad” Brad Keselowski into the outside retaining wall just prior to the start/finish line, NASCAR hit a new low!

Edwards made no secret that he intentionally punted Keselowski.  However he did not address where he did it, on the front straight just prior to the start/finish line, directly in front of oncoming race cars.  It was as blatant as his previous dumping of  “Blazingly Bad” Brad at Atlanta back in March of this year.

One had to feel for Bob Keselowski, Brad’s dad, who had to sit by once again and see Edwards put his son in grave danger! Bob Keselowski has been around long enough to remember that people do get killed in race cars. Just the fact that he used the word “killed” several times in a live TV interview show that at least someone at the track was aware of what could happen as a result of “Have at it” gone wild.

Notwithstanding all the safety improvements that occurred over the past 60 years in NASCAR, with both the race tracks and race cars, intentionally wrecking a driver at 120 mph or 200 mph could have catastrophic results that could never be undone.  Edwards almost put Keselowski into the grandstands at the Atlanta Motor Speedway in March.  Brad K walked away from the crash in Atlanta, he was also able to get out his race car last night under his own power,stunned and shaken nonetheless, likewise all the other race car drivers who wrecked because of Edwards willful and intentional crashing of Keselowski climbed from their race cars seemingly unscathed.  It certainly could have worked out quite to the contrary in both crashes!

There are business consequences too. Will mainstream sponsors continue to support drivers, and a sport in general, where intentional, controversial and possibly life-threatening high-speed wrecks are allowed?

And where is NASCAR in all of this?  We don’t know yet.  However, we do know that he apparently will be allowed to keep his win at Gateway and that in the 12 hours since the crash there was no word from NASCAR about the incident, one way or another!

WOMR believes that it is time for NASCAR to issue some kind of punishment that is equal to the “crime” that Edwards perpetrated on a fellow race car driver, not just a 3 race probation slap on the hands like back in March!

Additionally, WOMR believes that “Bad” Brad should pre-apologize to Jack Roush and advised Mr. Roush to please crank up your car building facility for at least for Edwards, ’cause Roush is  going to need to build Carl at least a couple of extra cars for both of the series, Sprint Cup and Nationwide!

Did someone say that NASCAR is now sanctioning “Destruction Derbies” that are companion races and that run simultaneously with the Sprint Cup and Nationwide series races on the tack?

What is your view of Edwards turning into a one man wrecking crew?