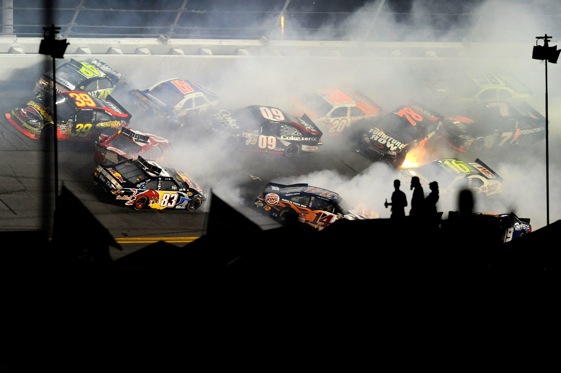 Things didn’t work out at the end of the Coke Zero 400 the way that Kevin Harvick thought that they would……. they worked out much better!  The driver of the  Richard Childress Racing #29 Shell/Penzoil Chevy won the race and increased his point lead in the Sprint Cup standings.

Kevin Harvick started up front on the pole and led the pack to the green flag of the Coke Zero 400.  As the night slipped away into the morning hours, when all the dust , crumpled metal, and debris was cleared, Harvick led the the remaining survivors to the checkered flag.  The Coke Zero 400 was Harvick’s second victory of the 2010 season and the 13th of his career.

“The Big One” erupted with just 12 laps to go in the race.  NASCAR red flagged the race for 20 minutes in order to gather up, remove, and clean the debris field caused by this colossal gathering of sheet metal trying to occupy the exact same piece of race track!  More than half of the field was collected up in this maze of smoke, crumpled sheet metal, and spewing radiators!  Mark Martin’s HMS #5 Carquest Chevy suffered the most spectacular damage, erupting into a blazing fire worthy of the 4th of July celebration fireworks.

TNT TV analyst, Kyle Petty, called Martin’s fire “the first official fireworks of the 4th of July” since the wreck happened just after midnight in Daytona.

On the restart the lead was up for grabs between the teammates of Harvick, Clint Bowyer, and the four time champ Jeff Gordon.  Harvick said that he thought that he was going to relegated to second place helping his teammate, Bowyer, get his first win in 2010 and propel him into the top 12 for The Chase.

“Really coming to the white (just prior to the GWC) I thought it was going to be the 33 (Bowyer) first and us second, and then the caution came out and we could see the white flag,” Harvick said. “I was content about that. I knew those guys needed a good day.”

But when anther accident brought a yellow flag, the end results was going to be a green-white-checkered flag finish.  “I knew that you never know what’s going to happen on the last lap with people pushing and shoving from the back”, Harvick said.

Bowyer restarted with the lead and with Harvick beside him in the first row. The lead went up for grabs almost immediately as Gordon, Harvick and a couple of others pushed past Bowyer.

Harvick said, “It was every man for himself at that point, just for the fact with the double file restarts and the way that it all shook out. You know the guys behind you are going to push you as hard as they can, so if I slow down to let him in or something like that, it’s just going to give the other line some momentum. At that point you just hope that your line goes faster than the other line, and fortunately tonight we were in the right line on the bottom. And it wound up working out.”

Here is the results of the 2010 Coke Zero 400 at Daytona International Speedway.

With all the carnage that occurred during the Coke Zero 400, the standings in the Chase is starting to get very exciting and there was some shuffling of positions at the end of the night.

After this race this is the current unofficial standings in the Chase.

What was your view of the Coke Zero 400?

Starting Sunday morning the asphalt on the track and on pit road is being dug, removed and repaved.  The pit road and pit boxes are being concreted.  So there will be some changes when NASCAR  and Workingonmyredneck returns in February for the Daytona 500.