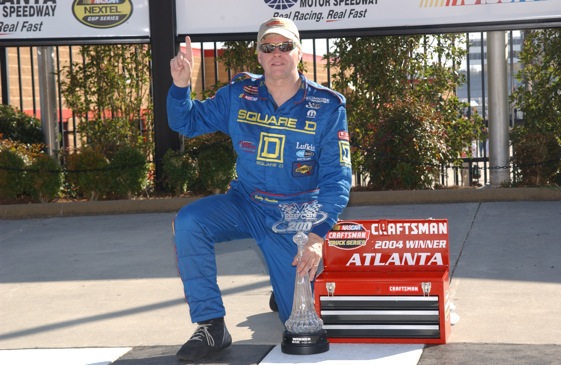 About 20 years ago the movie “Days of Thunder” made its premier.  The movie really made an impact on the sports scene with Tom Cruise and Robert Duvall as the stars and a soon to be known star named Nicole Kidman in the movie.  Not only was this movie a big deal to the sport of NASCAR, it was a life changer for a local Nashville boy who had endured some very hard times.

Nashville’s Bobby Hamilton, whose gritty, boots strap racing already read like a Hollywood screenplay, was chosen to drive the “movie car” to film action scenes.  The performance was so good that Hamilton landed a ride in the Winston Cup (now Sprint Cup Series), and launched his big time racing career!

The way that Bobby Hamilton landed the job in the making of “Days of Thunder” is an interesting story.  Rick Hendrick, acting as a consultant and advisor to the movie, was asked to suggest a possible driver for the movie.  Darrell Waltrip, then driving for Hendrick Motorsports, recommended a tough as nails, gritty driver from his old stomping grounds, The Nashville Fairgrounds Speedway, Bobby Hamilton.

Old DW was smart enough to know that this exposure might just be what Hamilton would need to launch his racing career to the next level.  Waltrip knew that Hamilton was a good driver who just needed a good break, and knew what it could mean for one of his old “homies”!

Despite being rough around the edges, Hamilton was not shy around the big “Hollywood Types”.    Hamilton climbed into the car, qualified 5th at Phoenix International Raceway and raced like it was Saturday night at the Nashville Fairgrounds Raceway!  The gritty Hamilton drove the race car to the front and lead the race for 10 laps before NASCAR had to wave him off!

Obviously, somebody forgot to tell Bobby that he wasn’t supposed to lead the race!

Hamilton only won four races in his Winston Cup career, but the last one might have been his most spectacular win,  That victory came while driving for Andy Petree in the 2001 race at Talladega Superspeedway.

Even though Hamilton was known for his tough as nails, gritty, outspoken personality, he was unable to win his battle with throat cancer.  Bobby Hamilton passed away on January 7, 2007.

In spite of the fact that Hamilton was a product of a broken home, lived out on the streets, dodged bullets as a “repo man”, had to borrow money to keep his racing career going in the early days in Nashville, and notwithstanding that Hamilton’s life ended on a tragic note, his story is truly one of  “rags to riches”!