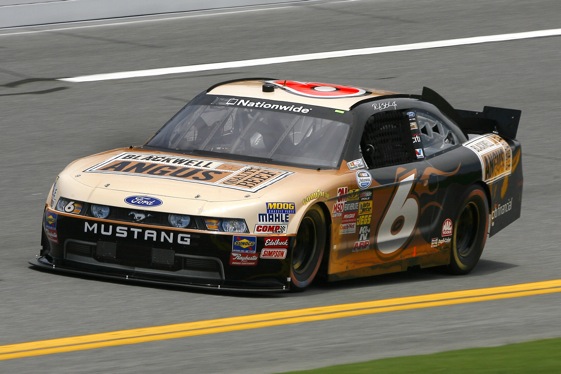 The “new generation” Nationwide Series cars are on the track this weekend at Daytona International Speedway for the Subway Jalapeno 250.

What you see is just what you get with this new generation Nationwide race car.  The Dodge, Ford, Chevy, and Toyota race cars looks like their badge plate mate on the showroom floor.  One of the exciting things about these new cars is that they actually look very cool just standing still.  You can tell the differences in the manufacturers without having to read the decal on either the front bumper or the rear bumper.

To paraphrase one of the Ford engineers, there’s no reason why the performance and appearance of a race car can’t both be right. Judging from initial practice times, the Mustang and Challenger are in the same ballpark with the new generation of Nationwide cars from Chevy and Toyota, brands that chose to stick with the same model as raced in the Sprint Cup. The Impala and Camry at least benefit from front and rear overhangs that are proportional as well as the absence of a snaggle-toothed front splitter.

But are we at a defining moment in NASCAR history? Are brands and approaches like those made with the Mustang and the Challenger the wave of the future in the Sprint Cup, a veritable sea change?

What is your view on this new and exciting change in the Nationwide Series?