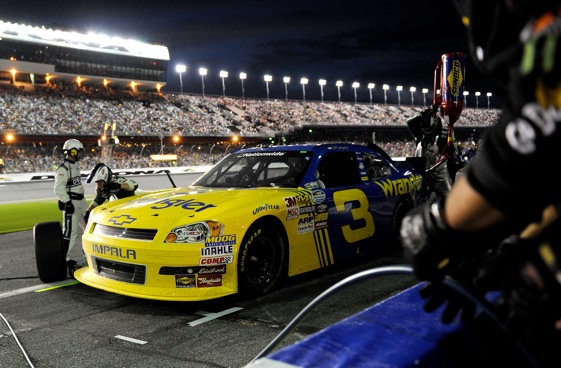 It was the third time that the #3 Chevy had been on the track since Dale Earnhardt, Sr. lost his life back in February 2001.  It was the second time that Dale, Jr. had driven the #3 Chevy since his father’s death.

Earlier Saturday afternoon Dale Jr.qualified the blue and yellow #3 Wrangler Chevy into the 3rd position for the Subway Jalapeno 250 at Daytona International Speedway, the very same track that his father lost his life in a last lap wreck.  It was also a cumulative effort by three different entities, JR Motorsports, Richard Childress Racing, and Dale Earnhardt,Inc.

On the third lap of the race Dale Jr momentarily took the lead.  Simultaneously, the crowd was on its collective feet with their hands held high with three fingers extended in honor of  “The Intimidator”, “Ironhead”, or just “The Man In Black”, Dale Earnhardt,Sr.!

For most of the race the #3 Wrangler Chevy hung around the top ten.  However, with 26 laps to go Dale Jr. made a pass for the lead and the entire crowd rose to their feet in a joyous celebration, as an Earnhardt driving the # 3 was bolting to the lead!

From that point it was Earnhardt,Jr’s race to loose.  The the unthinkable happened, a yellow flag signifying what would be a green-white-checkered finish.  On the restart Joey Logano pushed Dale Jr. to the lead and it was all that was needed to secure a very emotional victory for Dale Earnhardt, Jr., JR Motorsports, Richard Childress Racing, and for all of Junior Nation!

All is well in Junior Nation!

This victory leaves Dale,Jr. one shy of his father’s record at Daytona.  After all, Daytona and Earnhardt victories-that is just a family tradition!

What is your view of the Subway Jalapeno 250?