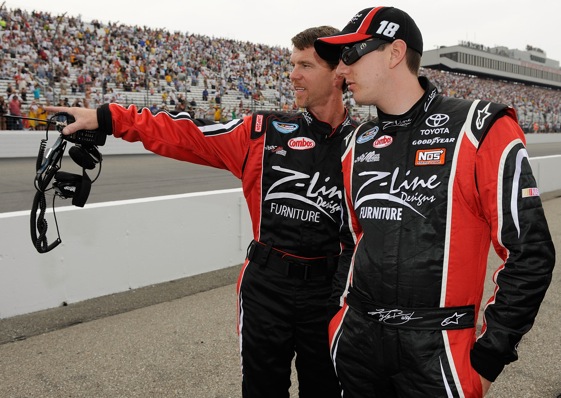 Hey Brian France are you listening?

I propose that you change the name of the Nationwide Series back to the Busch Series.  Better yet, the Kyle Busch Series!

The 25 year old throttle jockey from Las Vegas had just another day at “the office” Saturday at Louden, N.H.  Busch lead 125 of the 200 laps to win the Nationwide race there.  That propelled Busch into the position for all time laps leader in that series passing Mark “The Kid” Martin!  Kyle has now lead a total of  8,117 laps in the Nationwide Series, and he is only 25 years old!

In the 2010 Nationwide Series Busch has won 6 of the 13 races, additionally, he has not raced in all the races this season.  To show how dominating that Kyle has been in the Nationwide Series, he has won 36 races in his 186 starts  since 2003.  That is a great average, winning 19.35% of all races that he has competed in for this series!

With 36 wins in this series, Busch has now tied Kevin Harvick for second place on the all time win list.  The overall leader for most wins is Mark Martin with 48 victories, but that was accomplished over a 21 year career in this series.  Busch has accumulated  his 36 victories in less than eight years racing in the Nationwide Series!

Last year ol Kylie ran away with the series championship winning nine races and finishing second in eleven other races.  Think of that statistic, in 20 of the 35 races Busch was either first or second!  That is just udder domination!  Most likely he would be on another dominating run this year had he opted to run a full Nationwide schedule.  (Actually J.D. Gibbs opted for him!)

There is one thing for sure, like him or hate him, nobody can dispute the talent of this young, edgy, arrogant, some might say cocky “Las Vegas Weasel”!  At just 25 years old, Kyle has already established himself as one of the elite talents in NASCAR.

Just think how good he might be when he gets a little experience at this racing game!

What is your opinion of the ol Kylie?