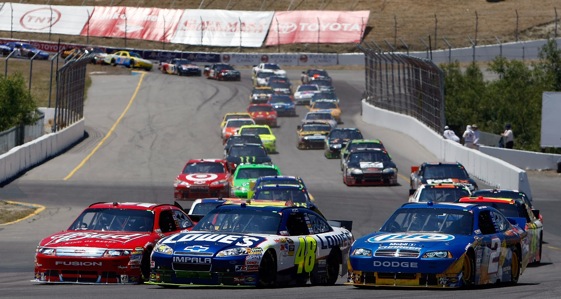 After much thought about the race last Sunday at Infineon, I must say that from the spectator’s view, all the beating, banging, and fender mashing was quite entertaining.  Usually Infineon races are not very interesting or entertaining.  However, Jeff Gordon’s impersonation of the county fair’s bumper cars put a new twist to the storyline throughout the race.

It appeared that all the drivers were racing like it was the last lap of the race, like they were double parked, like their wives wanted to go wine tasting or shopping right away!  There was no give in the phrase, give and take, only take!

Therefore, the patience and the forgiveness were not part of the driver’s composition Sunday.  The cars were colliding and banging off of each other like pool balls off of a break!

However, as the race went on some of the drivers were sending their apologies to the other drivers who they had either wrecked, smacked, or put off the race track, via their spotters.

If the truth be known, Jeff Gordon intended to punt every single car that he hit!  However, if he hit the pace car or the track ambulance, that is when he might need to send and apology!  Because we all know that it ain’t cool to hit either of those cars at the race track!

One Comment on “Pardon My Fenders, I’m Coming Through”