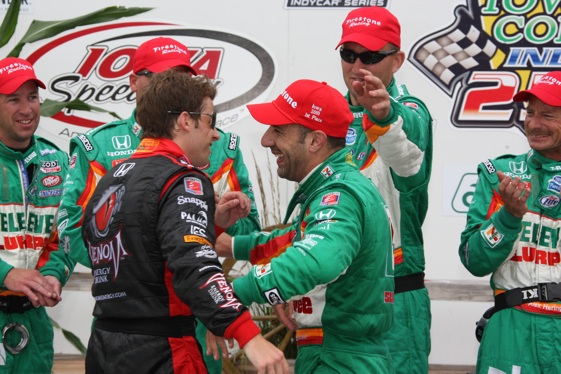 After crashing out of the two previous races at Iowa, Tony Kanaan’s luck changed dramatically Sunday, and he brought home the victory for Andretti Auotsport in the Iowa Corn 250 .  It was his first victory of the 2010 IZOD/IndyCar Series season, and for the 2004 IZOD/IndyCar champion, his first victory since the race at Richmond in 2008.

“Been a long time”, TK said from Victory Lane.

Team Penske’s Helio Castroneves finished second to Kanaan.  “It brought back memories”, Kanaan added.  Those memories Kanaan was talking about were of him battling Helio Castroneves back in their native Brazil, racing go-karts.

Dario Franchitti, who had a race car to win this race, fell out of the race with 50 laps to go.  That DNF was enough to cost  him the points leadership for the IZOD/IndyCar series.

With Franchitti’s bad finish at Iowa, Will Power has climbed atop the leader board.

Here is the unofficial results from Iowa.

The series now moves  on to Watkins Glen in two weeks for the race at the beautiful road course there in the upstate New York.