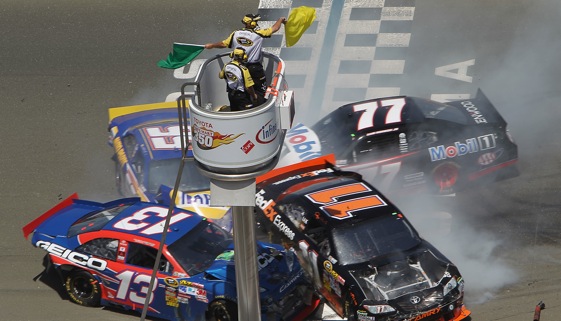 If what we saw Sunday at Infineon Raceway was a prime example of NASCAR’s edict of  “have at ’em boys”, the race teams will need to crank up their production of race cars for the rest of the season.  The Toyota/Save Mart 350 was more like a destruction derby than a NASCAR road race.

The race Sunday transformed some normally dignified race car drivers into “road rage perpetrators”.  Jeff Gordon looked like a bargain shopper at the famous Filene’s Bargain Basement in Boston!  He was not letting anything get in his way on his march towards the front, animate nor inanimate.

In fact, the only cars that the HMS #24 Dupont Chevy didn’t hit was the pace car and the track ambulance!  Nevertheless, two of the angrier recipients of Gordon’s bumper car driving style Sunday, were Martin Truex, Jr. and Kurt Busch.

After the race Gordon appologized to Truex, kinda sorta.

“I made a lot of guys mad today,” Gordon said. “I certainly owe Martin Truex and apology. I feel awful about that.”

“I guess Jeff figured he couldn’t catch us on the race track he was going to spin us out on the restart,” Truex said.

There was no apology from Gordon to Kurt Busch, another driver he dozed.

If you compare the nationwide race at Road America Saturday with the race at Infineon on Sunday, there was  quite a difference.  Granted at Road America there was a red flag for a big pile up, and there were bumps, and bangs along the way.  However, at Infineon it looked like the battle field at Gettysburg after the race!  The carnage resembled Bristol, Talladega, or Daytona after “the big one”!

What is your take on the “Infineon Destruction Derby”?

2 Comments on “Infineon Was A Hooligan!”