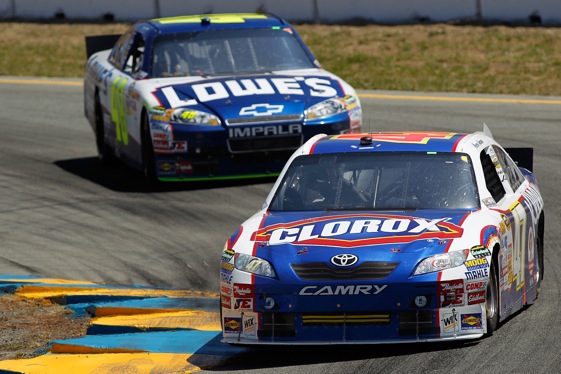 After watching the Toyota/Save Mart 350 I was aghast with the way that Marcos Ambrose let the victory slip right through his grasp!  I was just simply appalled watching him shut off his engine trying to save fuel, when it was apparent that fuel was not an issue for him.

WOMR has been to a couple of NASCAR races at Sears Point/Infineon Raceway, and everyone knows that the elevation change from turn #1 to turn #2 is about 150 feet!  Also knowing that the fuel pickup may an issue, WOMR finds it hard to understand what was running through the mind of Ambrose!

Up to that point it appeared that it was going to be a shootout between his car, the JTG/Daughtery #47 Clorox Toyota, and a hard charging HMS #48 Lowe’s Chevy for the victory, with Ambros being out front on the point.  It appeared that the race was set for an “old fashioned western, gun-slingin’, shootout” at the end!

Now having set the stage for what maybe known later as a huge gaffe/blunder, we all now know that Jimmie Johnson went on to win the Toyota/Save Mart 350 at Sears Point, no make that Infineon Raceway.  WOMR had to go to the reference material to really try to understand the term that needed to apply to this scenario for Sunday’s sudden turn of events, and it needed to be printable!

Mariam Webster defines a gaffe as “a noticeable mistake”.  The definition of blunder is, “to make a mistake through stupidity, ignorance, or carelessness”.

With the knowledge of those definitions now fresh in your mind, WOMR feels that the question begs to be asked.

Surely this will follow Marcos Ambrose for all of his career.  This could be NASCAR’s answer to the 1986 World Series Game 6 blundering error made by the Boston Red Sox first baseman, Bill Buckner!

Lesson to be learned from Sunday’s race at Infineon Raceway:

Changes in altitude may affect your attitude!