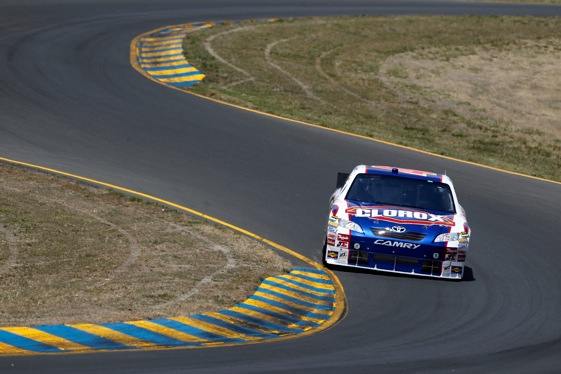 There was a time when the NASCAR drivers went to the road courses with dread in their hearts and just try to escape without killing themselves!

“These dang cars don’t like to turn right,” Dale Earnhardt said at Riverside in 1980. “I like the challenge of something different, but I don’t think a lot of these guys are very good at racin’ here.  And the chances of getting through the race in one piece ain’t very good.”

Even though there are still two road courses on the NASCAR schedule, Infineon and Watkins Glen, there is no dread in racing there.  In fact over the 30 years, the drivers have taken upon themselves to become much better road racers.  Most of the drivers have enrolled in road racing driving schools and participated in simulators.

With the competition level of NASCAR, the race teams can not afford to throw away two races and expect to be in the hunt for the Sprint Cup championship.  Each race in the 36 race schedule is very important for the teams to score as many points as possible.

One of the biggest changes from the early days of stock car road racing is the cars themselves. They are still big and heavy, but the teams are constantly finding ways to make it easier for the drivers to throw the big cars around the road circuits.

Road racing requires much more finesse than what is required on the oval race tracks.  That is not to say that there is not a requirement for finesse in the ovals, but road courses are attacked in a very different frame of mind.  It is not how deep you can drive the car into the turns before braking, rather, it is about slowing the car in a straight line prior to the apex of the turn, pivoting the car,  getting back into the throttle quickly, and accelerating out off the turn.  There is a rhythm involved in road racing.

These are just some of the techniques that the NASCAR boys have had to learn over the years in order to be a successful road racer.