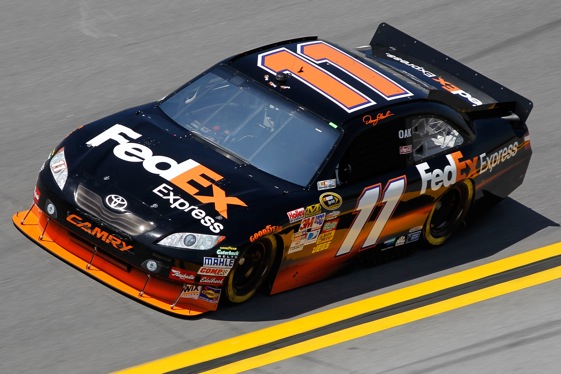 Denny Hamlin notched his fifth victory of the 2010 season, winning the Helluva Good! Sour Cream Dips 400 at Michigan International Speedway. All  of Hamlin’s wins coming after the switch from the rear wing to the rear spoiler.  Additionally, it is the second win in a row and the third in the last five races for the JGR #11 FedEx Toyota Camry!

Hamlin led a race high 123 laps of the scheduled 200 laps Sunday, and pulled away from Kasey Khane after the last restart very handily.  Unlike last week at Pocono, Hamlin did not have to hold the field off after the NASCAR version of overtime.  This week at Michigan there was no such thing!  In fact, Hamlin had a lead as much as 10 seconds over second place Kasey Kahne at Michigan.

Hamlin’s wins this season has run the full gamut of race tracks, superspeedway, short tracks, and intermediate tracks.  It appears that, at this particular stage of the season, Joe Gibbs Racing and Hamlin have got a huge portion of momentum on their plate!  That is not exactly great news for the other 42 competitors in the NASCAR Sprint Cup circuit.

Hamlin’s performance highlighted the chasm between his team and the rest of the series at the moment. He’s won five of the last 11 races and is poised to make a serious run at ending Johnson’s long reign.

Do you think that Hamlin has a good chance of disposing Johnson as Sprint Cup champion?

Here is the unofficial results from Michigan.