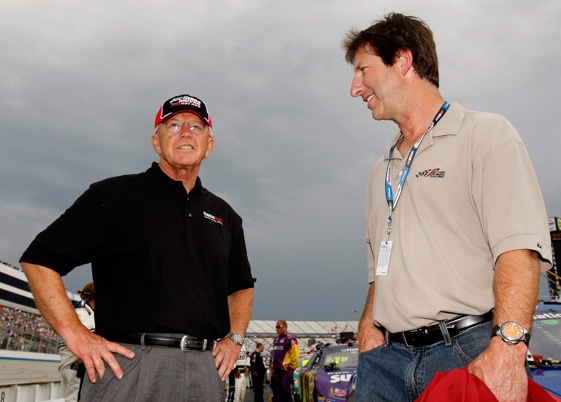 There is a fine line between being involved and being a hindrance when it comes to a family connection with your son or daughter’s career.

One of the great ironies of auto racing is that the sport is in many ways a family-oriented affair, but at the same time too much family participation can be a bad thing.

Isn’t it ironic that a racer is most successful when he/she is charging full steam ahead, taking no prisoners, rarely backing off, applying 100 percent full on, all the time?  But when it comes to being a successful mom, dad, fiance, or any other family member, the best ones have to learn to back off and let that family member be on their own and handle the situation as best as they can.

It has to be hard on those racing dads and moms. They’ve devoted lots of time and money to jump start their kid’s careers. They obviously have good racing instincts or their kids wouldn’t have advanced past the entry-level divisions. But at some point, an overactive dad or mom or friend or fiancé becomes a liability for a driver. Car owners and crew chiefs  and even NASCAR officials have enough egos and opinions to juggle without having to hear from dads too.

Racing dads are in the news this week as Joey Logano’s father, Tom Logano, was a major player in a pit road incident at Pocono Raceway between his son and Kevin Harvick.

It wasn’t an unusual scene. Something similar to that probably occurred at dozens of short tracks the night before.

Nevertheless, this is the “big time”!  The driver must handle their own battles and stand up for themselves, if he/she is going to drive in the “Big Show”!

There is a old adage that goes something like this:

“If you can’t run with the Big Dogs, then stay up on the porch!”

What is your view on Tom Logano’s involvement with his son, Joey’s, latest problems with Kevin Harvick?