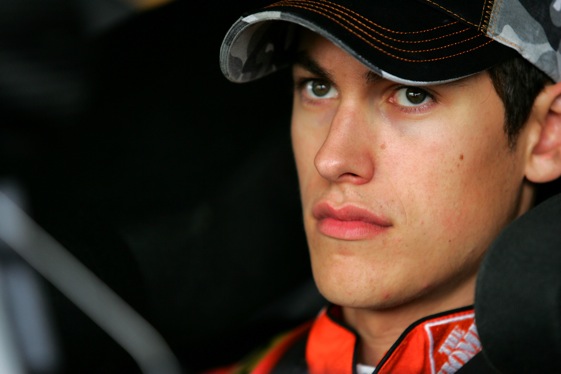 Seems these days that there is almost an award for every thing and/or category, even in NASCAR.  So there should be a category of “Zinger of the Year”!

So far for the 2010 race season I think that young Joey Logano should be the front runner for th4e award.  Last Sunday after Kevin Harvick punted Logano for the third time this season, the young man finally let Harvick know that he had a “chapped butt”!

Logano blamed Harvick for crashing him.  Additionally Logano stated, “His wife wears the fire suit in the family, tells him what to do, so it probably isn’t his fault.”

The dig referred to Harvick’s wife Delana who famously dresses in a bright orange-and-red racing uniform identical to her husband’s during her pit-road vigil at each race. Many other wives also watch from pit road, but none wears a racing suit. There’s nothing wrong with it of course; it’s just, well, unusual.

Normally there’s no sharper tongue in all of NASCAR than Kevin’s, but in this case Logano out-Harvicked Harvick!

Aside from being amusing, the crack was telling. It revealed a fiery side of the talented young Logano that most us had never seen. Logano had always come across as a polite, mild-mannered, almost shy youngster. Suddenly he’s raging and pushing and having to be restrained from getting to Harvick.

I suspect Logano’s stock went up among race fans. We like our drivers to have a little salt and pepper.

This is not a dig at Harvick, however, but he’s the king of the wisecrackers and has made plenty of cutting remarks at his fellow drivers over the years. That’s what made Logano’s comment score so high – the zinger got zinged.

What is your thoughts on the Harvick-Logano rivalry?