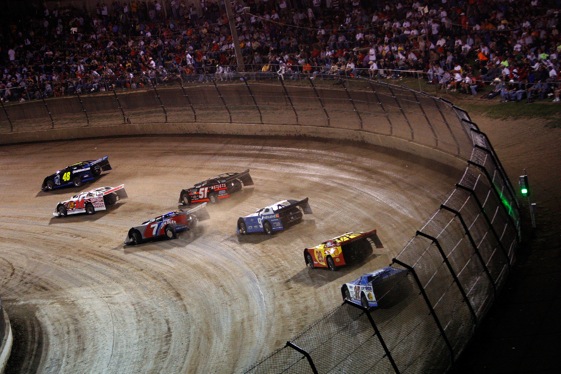 Wednesday night Tony Stewart, owner, promoter, and race car driver, put on the 6th annual Prelude to The Dream at his race track in southwestern Ohio.  That race track is better known as Eldora Speedway in Rossburg, OH.

The driver lineup was the who’s who of the many disciplines of auto racing.

The winner of the 30 lap main event this evening was Jimmie Johnson with Clint Bowyer putting a “San Jose slide job” on ol Kylie Busch for second place!  Quite interestingly, Tony Stewart elected to go to the back of the 27 car field trying to win an additional $50,000.00 for his team’s charity.  He didn’t win the race, however he passed 21 cars and finished the race in 6th place.

Even though WorkingOnMyRedneck appears to be critical of “ol Smoke” on the race track, nevertheless, over the past six years his organization has raised millions of dollars for Victory Junction, St. Jude’s Hospital, and other worthwhile children’s charities.  WOMR applauds Tony Stewart, Tony Stewart Racing, Stewart-Haas Racing, and all of Tony Stewart’s business associates, as well as the participating drivers and their sponsors, for raising and donating money for these wonderful children oriented medical facilities!