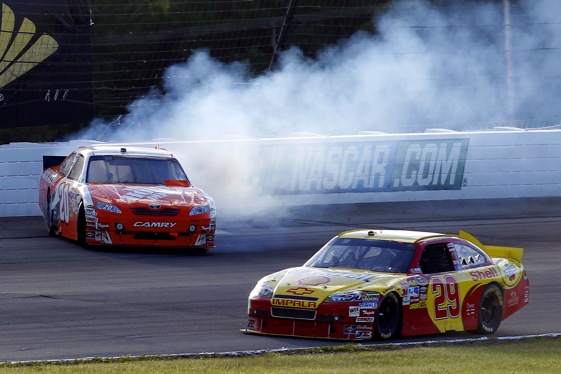 It is round three of the Harvick-dump-Logano racing saga!  With less than a handful of laps to go, Kevin Harvick drove his RCR #29 Shell/Penzoil Chevy very deep into “the tunnel” turn at Pocono Raceway. It is a very aggressive racing move late into the race, but unfortunately there happened to be the left rear quarter panel of the JGR #20 Home Depot Toyota driven by young Joey Logano in Harvick’s way.  So physics will dictate that only one object can occupy any certain piece of space at a time.  Therefore, Harvick’s contact with Logano’s left rear bumper sent Logano spinning and certainly on a vector towards the retaining wall.

In a very professional like manner, Logano”gassed ‘er up” and kept his Toyota from hurtling at 170 mph into the fence.  In fact the show that Logano put on was quite impressive keeping his car from smashing into the crash wall.  However, the smoke coming from the rear tires was only a small prelude as to the smoke that would come out from Logano’s mouth and ears once the race was over!

If anyone still thinks that NASCAR and their drivers are mundane, lack fire in their belly, and personality, then you must not be paying attention to the 2010 season.  NASCAR’s policy of “have at it boys” has produced some very spirited confrontations and feuds, even among team mates!  Witness the Jeff Gordon-Jimmie Johnson saga, the Kyle Busch-Denny Hamlin rue, the Carl Edwards-“Blazingly Bad” Brad Keselowski incident, just to name a few this season.

NASCAR this season, has shown that the fire, desire,and the free-spirited race car driver still exists!  The only thing missing is the good old fashion “Blue Collar Butt-Whippin”!  Can it be just around the corner?

What is your take on the Kevin Harvick-Joey Logano confrontation?

P.S. Should NASCAR revoke daddy Logano’s “hard card” for his involvement in this fracas?