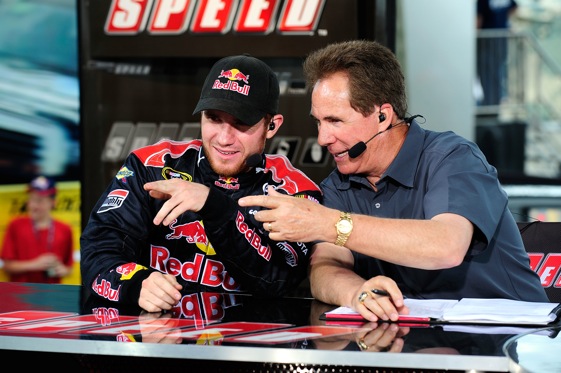 FOX just ended its coverage of coverage of the 2010 NASCAR race season, and clearly it was the winner of the first 13 races!  This week it has handed off NASCAR to TNT beginning with the Pocono race Saturday.  TNT broadcasts just six races then the rest of the season goes to ESPN, except when ESPN hands off to ABC.  Sounds confusing, right?

WOMR has seen reports that some viewers think that the FOX broadcast booth has become too predictable and stale, that Darrel Waltrip  too cutesy, that Larry Mac to vanilla, that Mike Joy too much of a NASCAR homey!  My friends, this reporter has to disagree unequivocally and wholeheartedly with those complaints.

There are complaints that the FOX  people spend too much time explaining “basic NASCAR 101′.  The seasoned fan must remember that there are thousands that may be tuning into a NASCAR race for their very first time and may not have the “basic tool bag” of NASCAR knowledge.  Therefore, it is incumbent upon the announcers to try to lay down the basics so that all the viewers can fully understand the nuances of strategies that may come to pass during the race.

Again, WOMR is somewhat biased in expressing this view.  But for instance, Darrell Waltrip (ol DW) is a 3 time Sprint Cup champion, with 84 victories, and really knows what he is talking about.

Now WOMR is reasonably sure that Larry McReynolds’ grammar teacher develops shingles when he commits assault and battery, murder, and mayhem on the English language each weekend!  But one thing about Larry Mac, he puts on no airs, no pretenses, and is a mechanical genius who has been in the trenches!  He, too, knows of what he speaks!

Mike Joy is anything but a NASCAR yes man.  His voice is pleasant and comes across as likable and knowledgeable.  Like ol DW and Larry Mac, Mike Joy is a life- long gear-head, who lives and breathes cars and racing.

Personally, WOMR can’t wait for the return of the “FOX boys of racing”!