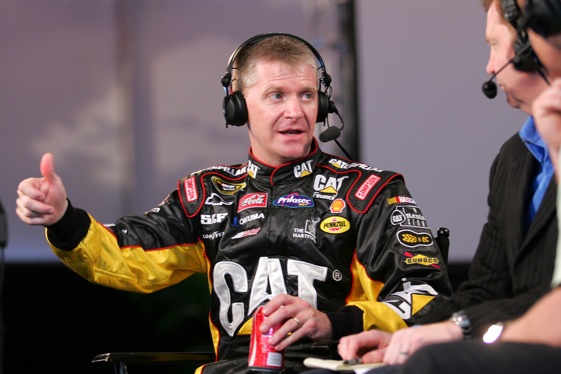 Jeff Burton has a reputation of cool, calm driver who takes his lumps and rarely complains, that was until Sunday evening after the Coca-Cola 600 at Charlotte Motor Speedway.  That is what made the scene so odd after the race.  Jeff Burton confronted ol Kylie Busch at Busch’s car and began to shake his finger in Busch’s face and explain, in no uncertain terms,  his displeasure of Busch!

As Burton finished his one sided discourse with the Las Vegas native, Busch made a comment that lit Burton’s candle once again!  Burton spun around once again and repeated his displeasure of Busch and used his extremely long index finger to put an exclaimation point to the sentence!.

It is not known what ‘pearls of wisdom’ Burton ended the conversation with, nevertheless, it was obvious to Kyle to keep his lips zipped this time!  From an outside observation, it appeared that Burton had seen enough of “The Kyle Busch Movie” and was totally fed up with it!

In light of the Kyle Busch-Denny Hamlin teammate feud presently going on, it appears that Busch is cultivating other enemies as well this season!

What do you think about ol Kylie and his driving antics?  Does Kyle need to attend a”Dale Carnegie course”?

Kyle Busch’s driving style has been compared somewhat  to “the Intimador”, Dale Earnhardt,Sr.  But I can say to Kyle something like Sen. Benston said to Dan Quayle in the debates a few years ago……