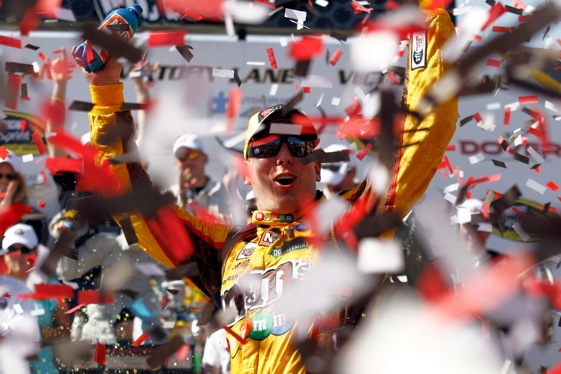 Has anybody seen the bus?

Just when all had thought that the heated, vulgarity laced, discussion between Kyle Busch and his teammate Denny Hamlin had been pacified by team owner Joe Gibbs last Saturday night, the feud continues!  Kyle is quoted as saying on Thursday, “For me I am over the Denny Hamlin issue.  It’s done, we’re moving forward and we look forward to the rest of the year and the [Coca-Cola] 600 this weekend.”

However, Denny Hamlin was considerably more blunt about the matter when discussing his feelings.  “I definitely wouldn’t change anything that I would do and nobody in my position would,” said Hamlin. “I challenge anyone to be in that position and to change the way that I drove. The thing is that he [Busch] was never there, there was never a hole for his car to fit in, so he has a gas pedal and a brake just like I do. He could choose to check up and pass me in the next corner or put his car in the fence like what happened.”

Hamlin didn’t just stop with that blunt statement.  He was asked if he would work with his teammate, Busch, he expressed his displeasure with the hot tempered Las Vegas native.

“I’m not going to put too much effort in it, to be honest with you,” Hamlin said. “Kyle brings this stuff up himself and he gets mad at the media for asking him questions about his blow-ups and stuff, but he does it to himself. I don’t want to be part of it. Any drama that he wants to create or anything is on him. Anything he says on the radio is on him. [That’s] all I’m going to say and I’m going to be done with it. Each year I think Kyle’s going to grow out of it and he just doesn’t. Until he puts it all together, that’s when he’ll become a champion. Right now he just doesn’t have himself all together.”

And then, for good measure, this little parting rim shot from Hamlin:

Hey Joe, looks like you have your work cut out for you this season!  Maybe you should try the Rick Hendrick technique of “milk and cookies” used at one time with Chad Knaus and Jimmie Johnson when they were feuding!