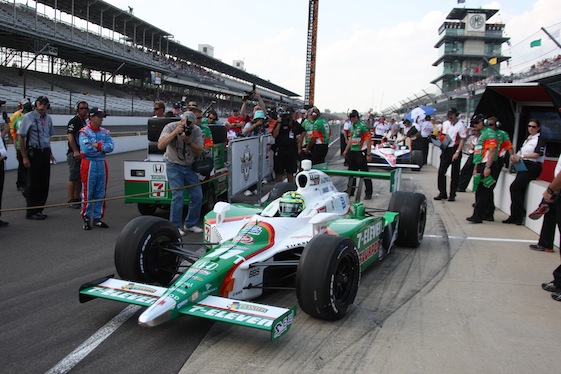 (Photo courtesy IZOD IndyCar Series)
Throughout all the additions, renovations, and updates applied to the Indianapolis Motor Speedway since 1909, much of its original atmosphere seems to shine through.  Many of the more than 3.2 million bricks are still there covered up  under the 1 1/2 feet of asphalt.  Yet the only part of the bricks that are still visible is the yard of bricks located at the start-finish line.  The concrete and steel grandstands along the front stretch offer reminders of their wooden predecessors, additionally the pagoda has had several reincarnations.  About the only casualty of progress has been the old wooden garages of gasoline alley, replaced in 1986 by the concrete structures now.
Originally built as a testing facility.  The four original partners were Carl G. Fisher, James A. Allison, Frank Wheeler, and Arthur Newby who put their minds together to build the speedway on a 320  acre tract of farmland west of downtown.  All four were involved in Indy’s thriving, higher end, much pricier auto industry.
Fisher owned a bicycle shop, teamed with Allison to build the company that made compressed gas headlights for those early cars.  Newby owned a bicycle shop but made his name making chains, which were the key to the drive trains in cars and airplanes.  Wheeler, with George Schebler, built carburetors.  Over a campfire in November 1905 they reportedly brainstormed ideas that four years later led them to pool $200,000 (with another $50,000 borrowed from a fifth investor who eventually dropped out) to make the racetrack a reality.
Construction began March 20, 1909 for the inaugural meet in August that ended in disaster with numerous accidents, five deaths, and an outcry to shut down.  Fisher and Co. decided to pave the track with bricks from an Illinois company and subcontracted through four other firms.  The job was completed in just 63 days.
In 1911 the first Indianapolis 500 was premiered for all to see and was won by Ray Harroun in a Marmon Wasp that included the first rear view mirror.  His average winning speed was 74.602 MPH!
The Speedway has changed ownership three times in its history.  The four track founders sold the track to WWII hero and former Eastern Airlines owner Capt. Eddie Rickenbacker in 1927 for about $750,000, the same price he sold it for in 1945 to Terre Haute, IN businessman Tony Hulman.  At the time that Hulman took control of the speedway, it had been dormant because of WWII.  Hulman rebuilt the speedway from the ground up, replacing the wooden grandstands with the current version.  His efforts made the month of May synonymous with the Indianapolis 500!
Whether standing or sitting in the grandstands of  the Indianapolis Motor Speedway, this grand racing facility oozes history.  There is this faintly heard whispering of names from the past.  The names of Rex Mays, Ray Harroun, A. J. Foyt, Billy Vukovich, Al Unser, Sr., Bobby Unser, Andy Granatelli, Parnelli Jones, Roger Ward, Rick Mears, Johnny Rutherford, Mario Andretti, and Roger Penske are just a few that have walked in Gasoline Alley.
This Sunday is the the celebration of the Indianapolis Motor Speedway’s centennial era, 100 years.  I can’t wait to see the Purdue marching band, to hear the singing of “Back Home Again In Indiana”, to hear those high strung V-8’s fire up!
But lest we never forget, the single most important reason that we celebrate this holiday is to honor our American military!  That is what this weekend is really all about. We must never forget about the sacrifices that we have asked of our young men and women!
TIL NEXT TIME, I AM STILL WORKING ON MY REDNECK!