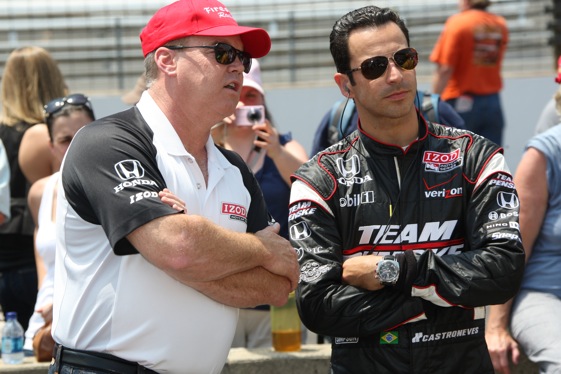 It was like old times Thursday night out front of the downtown Indianapolis Marriott ballroom.  There were many of the past Indy 500 racers there giving each other a hard time.  Among the drivers there  was Danny “Hollywood” Sullivan, Duane “Poncho” Carter, “Little Al” Unser,Jr., “Rocket” Rick Mears, Tom “The Gasman” Sneva, Johnny “Lone Star JR” Rutherford, and Mario, no last name needed!

The occasion for this meeting was that  the Indianapolis 500 Oldtimer’s Club was honoring the drivers of the 1985 Indy 500, won by Danny Sullivan after a mid-race while racing Mario for the lead!  It is hard to imagine that race was now 25 years ago.  More importantly, the names of the race car drivers are still fresh in most of the fans’ mind.

Most people new these drivers.  Even the casual fan knew these names, their racing pedigree, and their nicknames.

Sadly those days are long gone in open wheel racing.  Check out the starting grid and see how many of the names are recognizable.  Yeah sure, most people know Helio “Spiderman” Castroneves, Dario “Mr. Ashley Judd” Franchitti, Danica “Go Daddy.com” Patrick, and maybe Marco Andretti, Mario’s grandson.  But that may be as far as the recognizable names go.  The rest of the 33 starting grid drivers dwell in obscurity.

Most of the starting grid of the 2010 Indianapolis 500 are not from this country, and, therein lies some of the problem.  “The Greatest Spectacle In Motor Racing” has very few names that the average fan can recognize.  Hence, that is one of the main reasons that the IRL’s  popularity has reached a dangerously low level!

The bitter war that was waged by the former Indianapolis Motor Speedway CEO and Indy Racing League President, Tony George,  for 12 years with the former CART series, is mainly the reason for the fans  interest loss in open wheel racing.

On the plus side, this Sunday there will be approximately 250,000 people at the Indy 500, down significantly from the 400,000 people that would flock into the Indianapolis Motor Speedway prior to the 1996 split.

What is your take on the difference these days?