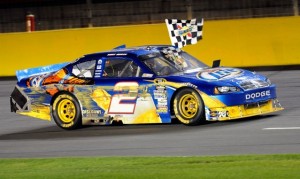 After starting on the pole because qualifying was rained out, after two encounters with the outside retaining wall, after a hard charging pack on the last restart, Kurt Busch in the Penske “blue deuce” captured a cool million dollars for the victory at Charlotte Motor Speedway Saturday night by winning the NASCAR All Star race.

Busch appeared to have the dominate hot rod early in the contest.  But his choice of racing lanes, “high, wide and in his case not so handsome”!  Yes, my friends, he was driving the Penske #2 Miller Lite Dodge way up high and not afraid to die.  But two encounters with the retaining wall slowed his Dodge up through the middle part of the contest, and dropped Kurt out of the top ten.  That allowed Jimmie Johnson, Denny Hamlin, and little brother Kyle Busch to contend for the lead.

By the last 10 lap dash segment, the Miller Lite pit crew got Kurt patched up, changed a couple of shocks, sent him back out in 11th place, and allowed the “blue deuce” back into contention.  Denny Hamlin, driving the JGR #11 FedEx Toyota faded,  little brother Kyle Busch, driving the JGR #18 M&M’s Pretzel Toyota, crashed after his fellow teammate Denny “Gimp-Along” Hamlin squeezed him up into the fence.  Jimmie Johnson spun out, leaving only Martin Truex, Jr., and Joey “Sliced Bread” Logano to challenge Kurt.

Neither Truex nor Logano had anything for the #2 Miller Lite Dodge and Busch motored away to his first ever NASCAR extracurricular activity race victory, ie the All Star race or Bud Shootout race.

The All Star victory made his boss’ trip to Charlotte all worth the flight.  Earlier in the day Team Penske driver Helio Castroneves won the pole for the 2010 Indianapolis 500, so “The Captain”, Roger Penske, had a great Saturday afternoon and evening.