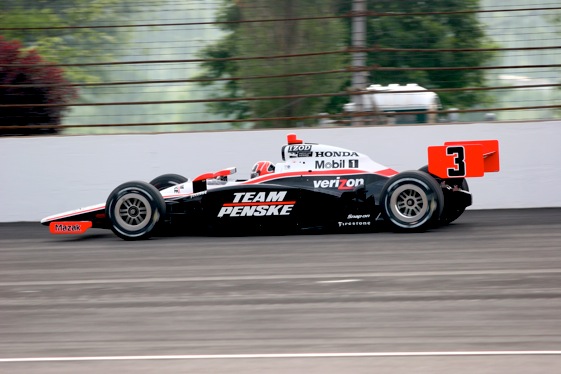 Helio Castroneves is setting himself to make a historical run at winning his fourth Indianapolis 500.  Saturday he proved that he has a fast race car by securing the 2010 Indianapolis 500 pole in his Team Penske #3 black and orange bullet.

He was fastest during the first segment of the qualifying session – which locked the fastest 24 cars on Pole Day into the field. And he was untouchable in the final, hour-and-a-half Fast Nine segment – in which the fastest nine drivers from segment one went for the pole.

It was his fourth pole at Indy.

Starting second in next Sunday’s race will be Will Power, who is Castroneves’ teammate at Team Penske.

Filling out the first row is Dario Franchitti of Target Chip Ganassi Racing.

In Row Two of the grid will be Ryan Briscoe of Team Penske, Alex Tagliani of FAZZT Race Team and Scott Dixon of Target Chip Ganassi.

The third row and the final Fast Nine from Saturday, will be Graham Rahal of Rahal Letterman Racing, Ed Carpenter of Panther/Vision Racing and Hideki Mutoh of Newman Haas Racing.