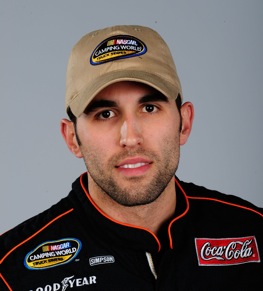 (Photo by Sam Greenwood/Getty Images for NASCAR)
A race short on drama, ratcheted up the excitement during the closing laps when Aric Almirola pulled away from the field on a green-white-checkered flag finish to capture Friday’s NASCAR Camping World Truck Series Dover 200.

It was the 26-year-old Almirola’s first victory in 55 career starts in NASCAR’s truck series.  “It’s such a long time coming,” Almirola said. “I’ve raced a lot of NASCAR races. To finally be here in victory lane, what a treat.”

After cutting a right-front tire early in the day in the Billy Ballew Racing # 51 Toyota, Almirola was forced to overcome a two lap deficit.  But he managed to take advantage of NASCAR’s wave around and free pass procedures to work his way back onto the lead lap.

After winning the pole and dominating most of the race, Kyle Busch in his KBM #18 Toyota Tundra, developed a faulty carburetor on what was to be the final restart of the race, allowing Almirola to slip past him for the win!

Busch was relegated to following the pace car into the pits and failed to finished the race!  Once again Kyle Busch has the dominate truck or car and failed to secure the victory.