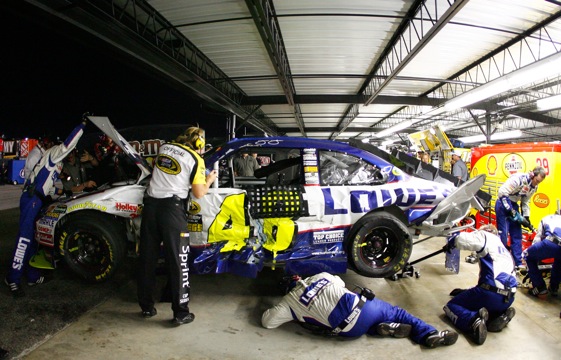 Over the past four years how many times have the fans seen Jimmie Johnson miss a wreck or a near disaster? The driver of the Hendrick Motorsports #48 Lowe’s Chevy always seemed to have had leprechaun riding on his shoulder.  He had an uncanny knack for avoiding most, if not, all trouble on the race track.  No matter what happened at the race track, Johnson could always fall into a bucket of s##t and come out smelling like a rose!  But is that run of luck now coming to an end?

Johnson was cruising around Darlington Raceway last Saturday night, minding his own business and staying out of trouble – as he usually does – when suddenly A. J. Allmendinger lost control, zinged up the track, and nailed Johnson’s Chevy. Jimmie was OK,  but his car was a demolished pile of sheet metal and knocked out of the race.

The crash at Darlington was Johnson’s third DNF (did not finish) in 2010.  The #48 team is used to racing an entire season without a single DNF, but that is not the case this year.

And so the question begs to be asked:  Has the incredible luck of the #48 Lowe’s Chevy run out?

Whether it is “luck” or defying “the odds”, Johnson has either been very lucky or just great at defying the odds.  That is what makes his four consecutive championships such a remarkable feat, but sooner or later you must pay the piper.  And it appears that the piper is standing on the pit box now collecting for the past four years!

This could be the year that the #48 Lowe’s team has to repay for all the good fortunes of the past four years!