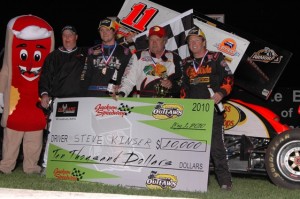 Steve Kinser extended his string of top-five finishes with the World of Outlaws at Jackson Speedway to seven, in impressive fashion, finding his way to Victory Lane for the third time at historic Minnesota fairgrounds facility before a huge crowd.

Kinser used a strong restart on the 18th lap to get under Joey Saldana in turns one and two and won a drag race down the back straightaway aboard the Tony Stewart #11 Bass Pro Shops Maxim, taking the lead as the pair hit turn three. For the 20-times series champion it was his second win of the season to bring his amazing career total to 554 A-Feature triumphs. He also moved into second in the series standings as he chases his record 21st title.

“It was good,” said Kinser of his win. “We had a good race car all night. We didn’t get the start we wanted early, but we had a strong restart and got to the bottom and ran the bottom really good. I just had a good car all night really.”

The race began with Kinser leading on the initial start, though a red flag came out prior to the lap being completed, leading to a complete restart. On the second start, Joey Saldana shot to the lead and was in lapped traffic just a few laps into the scheduled 25-lap contest.

Prior to the lap-18 caution, Saldana had a huge lead as he worked his way through lapped traffic. The native of Brownsburg, Indiana, who came into the race second in points, was forced to the work area on the 24th lap with a flat right rear tire and would restart as the last car on lead lap, gaining a couple of spots over the final two laps to salvage a 12th-place finish after leading the first 17 laps.

With the win on Saturday night, Kinser became the first driver this season to win multiple races on a half-mile track, as he was also victorious at  Volusia Speedway Park in Florida back in February. In seven career starts at Jackson Speedway with the World of Outlaws, he has an average finish of 2.7.

For those who have never been to a good sprint car race on dirt, or never been to a World of Outlaws show, you are missing some excellent racing!  If you live close to a dirt track, check out to see what divisions of racing that is available.  If there are modifieds, late models, midgets, or sprint cars racing there, check out the venue it might money well spent.