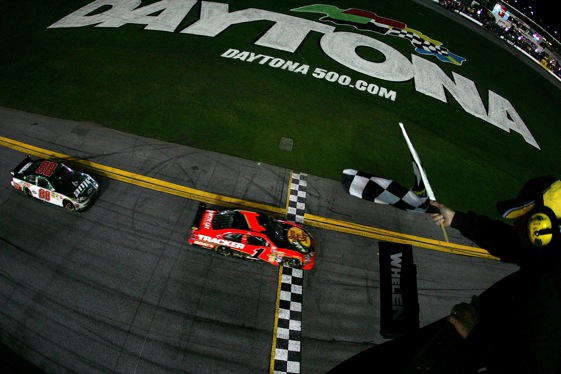 Many think that Roush-Fenway Racing is not only a top level race team in NASCAR, but the answer to many of their Ford prayers.

But for Jamie McMurray, driving for Roush was just plain uncomfortable. A bad pairing for him and for Roush, he said this week.

“That was a tough place to fit into,” McMurray said. “It’s such a big organization. They have so many great race-car drivers over there that it’s kind of hard to find your place.”

A native of smallish Joplin, Mo., McMurray learned to drive on the rural dirt tracks of the Midwest.  However,his big break came in the fall of 2002 when, at 26, he was plucked from the Nationwide Series and named to replace an injured Sterling Marlin on Chip Ganassi’s Cup team. He took the Ganassi car to Victory Lane in Charlotte in his second start.

In three-plus seasons with Ganassi, he piled up a nice stack of top-five and top-10 finishes but never won again.

In a bit of a break from NASCAR tradition, he negotiated a deal to drive for Roush while still driving for Ganassi during the 2005 season. His announced move to Roush came in July of 2005 and it came with a curt response from Ganassi, who said in a prepared statement, “Jamie’s made a decision to go in another direction after we’ve both fulfilled the commitment that we made to each other in 2002.”

Going to work for Roush may not have been an answer to McMurray’s prayers but it sure looked like it would elevate him to the top tier of Cup. Roush drivers won 15 times in 2005. Every one of the team’s five full-time drivers won a race that year.

With the NASCAR mandate to limit the NASCAR race teams to a maximum of four cars, it was McMurray and his team that felt the ax at Roush-Fenway Racing. Nevertheless, it did not take long for McMurray to find a new boss, which was his old boss-Chip Ganassi!

In the first race of 2010, McMurray and Gannasi found the most coveted of victory circles- The Daytona 500!  Mc Murray has been very competitive in his new 2010 ride every since the Daytona 500.  At Talladega he had the finish line in sight only to have Kevin Harvick make a perfect sling shot move out of the tri-oval  to steal the victory from Mc Murray!

This weekend the Sprint cup Series visits Darlington’s “Lady In Black”.  Although McMurray has never won a race at Darlington, it would no be a stretch to see him vying for the win Saturday evening!