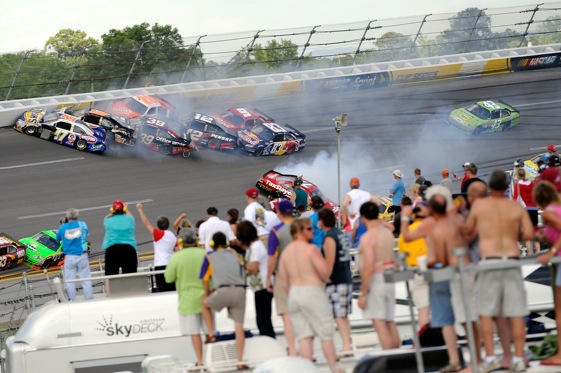 NASCAR’s philosphy change and its new approach of “have at it boys” now seems to be paying dividends.  It has brought back the excitement to racing.  The addition of up to 3 green-white-checkered finishes to insure a race ending under green is creating excitement.  It is also creating a new strategy for late race pit stops.

A good bit of the push for the recent rules changes can be traced to last fall’s Cup race at Talladega, where NASCAR officials had drivers on edge with their vows during the drivers meeting to punish excessive bump drafting. Many blamed that possibility of penalty for a race that was lackluster for most of the 500-mile run.

This time around, there was no mention of bump drafting in the Talladega drivers meeting. The drivers were left to police themselves, and they did a relatively good job of it. And the change back to the spoiler from the wing on the rear decklids of the cars seemed to improve the racing, as trailing cars tended to close the gap quicker than before.

When all the factors were added together, Sunday’s Aaron’s 499 had a little something for every NASCAR fan. There were an all-time Sprint Cup record number of lead changes and different leaders, with 29 drivers swapping the lead 88 times, three green-white-checkered-flag finishes that extended the race from 188 to 200 laps, another chapter in the escalating feud between Jeff Gordon and Jimmie Johnson.

And to top it all off, a battle to the wire for the win between Jamie McMurray and Kevin Harvick, with Harvick winning by a scant .011 seconds with a pass reminiscent of the old days at Talladega.

“The show isn’t going to get any better than this,” said Juan Pablo Montoya, who finished third behind Harvick and McMurray.

“I think it was very typical Talladega,” Harvick said. “I think there was a lot of pushing and shoving, two and three-wide. The spoiler made it so you could pull back up on somebody if you made a mistake. You just didn’t want to be the very last car. It was very interesting day and it played out perfect for us.’’

Harvick’s crew chief Gil Martin compared the winning pass to ones that occurred at Talladega back in the day.  “That was a tremendous pass just like the old days, like you would have seen Buddy Baker or Cale Yarborough or anybody do here,” Martin said. “That was a tremendous pass, and it was timed perfectly.”  (Re-read the previous article, “Harvick wins the Aaron’s 499”, on this site and you will get a feel for just how cool the Harvick pass was!)

Harvick and McMurray both said that with the aerodynamics of the current car, once Harvick made his final move, McMurray was a sitting duck.

Harvick said the record number of lead changes and the exciting finish could be contributed to a combination of the new spoiler that has replaced the wing on the rears of the cars, the drafting skills of the drivers, and to NASCAR’s loosening of the enforcement on aggressive driving.

So what is your view of the new restrictor plate racing?

If the excitement of this style of racing doesn’t get your adrenaline roaring, then I suggest that you start getting involved in curling!