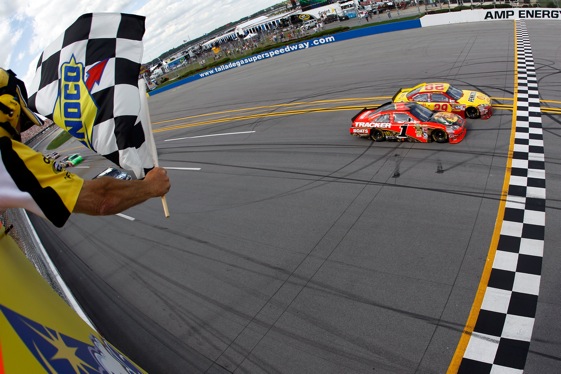 So as a race car driver at either Daytona or Talladega, those double yellow lines can either be your best friend or your worst enemy.  In two out of the three restarts Sunday, the double yellow line was Jamie McMurray’s best friend!  However on the the third restart the story was different!

On the third and final restart McMurray led the field to the green flag with Kevin Harvick snugly positioned on his bumper.  The two cars appeared to be wielded nose to tail as they raced around the 2.66 mile superspeedway in Talladega, Alabama.  McMurray positioned his race car to the bottom of the race track,  right next to that famous double yellow line,  like a highly skilled seamstress.  And just like a Siamese twin Harvick’s #29 Sell/Pennzoil Chevy front bumper was attached to McMurray’s #1 Bass Pro Sports Chevy rear bumper as they raced around that final lap at Talladega.

Harvick and McMurray were busy desperately trying to race each other hard, all the while sizing each other up, trying to figure what the other’s final move would be.  Victory was definitely in sight for both race car drivers as they hurtled their way to out of turn four at the rate of 450 feet per second.  However, Harvick could hear the ticking of old father time.  Tick, tick, his opportunity to win was starting to slip away as they closed in on the tri-oval, the finish line just a few hundred feet further down the race track!

Now race car drivers have good and long memories, witness the pay backs!  They are students of the racing game and even though some of these young men are not old enough to remember “the good old days”, however, they do understand that those historic moves at Daytona and Talladega  were pure racing genius!

In a move that reminds the fervent NASCAR fans of the “old days” at Daytona, where “the slingshot” move was perfected, of Petty and Pearson, of Yarborough and Allison, of Buddy Baker and Benny Parsons, Kevin Harvick “sucked up” to McMurray’s rear bumper going into the tri-oval at Talladega, positioning himself right on McMurray’s bumper,and for the opportunity to propel himself to victory.  That move disrupted the aerodynamics of the air flow over McMurray’s rear end causing his race car to, ever so slightly, get loose, barely wiggle, and move up and off of McMurray’s best friend, the double yellow line.  Mc Murray opened the door just enough allowing room for Harvick to wedge his race car between McMurray and his new best friend, the double yellow line, inching  just enough ahead of McMurray to eek out a victory by .012 of a second!

That minuscule mis-handling of the #1 Bass Pro Sports Chevy that Harvick engineered coming out of the tri-oval created an ever so slight moment of opportunity for Harvick with just a few hundred feet to go to get to the finish line.

“Carpe diem”, seize the day.  It was, in fact, Kevin Harvick who seized the day!

If that is not excitement, then I suggest you find another sport to become involved in!

This victory was the first victory for Kevin Harvick and the RCR #29 shell/Pennzoil Chevy since his victory at the 2007 Daytona 500.  Is this going to change some of the garage talk about the Harvick-Childress contract negotiations?