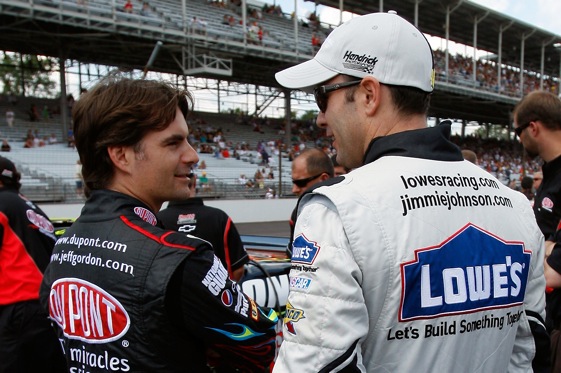 There was a time when race car drivers would do ANYTHING to win a race!  Do the names like Dale Earnhardt, Sr., David Pearson, Cale Yarborough, Fireball Roberts, and Junior Johnson ring a bell?   These men were hard charging, blatantly fierce race car drivers.

Yeah I know that was long ago and in a far away place right, kind of like Star Wars?  Wrong!!! That was NASCAR competition, pure and simple!

What is with these so-called team mates being so happy, friendly, wanting to help their team mates score extra points by pulling over and allowing their team mates to lead a lap and pick up 5 bonus points?  What happened to the fierce, macho competitive edge that was once displayed?  Where is the game face of these “steely eyed“, fearless men?

Has Corporate America taken control of the one last bastion of fierce, masculine, take-no-prisoners type of independent competition?

Was too much made out of the competitive beating and banging of team mates, Jimmie Johnson and Jeff Gordon, after all, they are both four time Sprint Cup champions?  They are supposed to have that “fire in their belly”!  Do you think that Junior Johnson, Cale Yarborough,David Pearson, or Richard Petty would have pulled over and let his team mate lead a lap for some bonus points?  I think NOT!

What is your take on the subject of team mates?