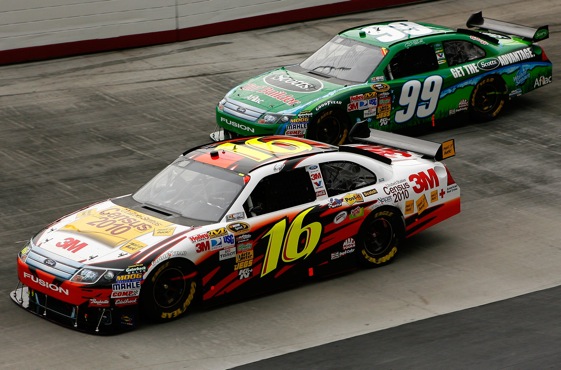 The new Ford restrictor plate engine will be available to both Roush-Fenway and to Richard Petty Motorsports for the race at Talladega this weekend.

Sunday’s Aaron’s 499 will be the first points race in which a majority of Ford Fusions will have access to the FR9. Ford teams ran the engine in practice, qualifying and the Gatorade Duels during Speedweeks at the 2.5-mile Daytona International Speedway in February. But only Bill Elliott, Matt Kenseth and Elliott Sadler ran the engine during the season-opening Daytona 500, with Kenseth posting an eighth-place finish.

Introduced in January 2009 under the code-name “FR9,” the engine is the first purpose-built NASCAR powerplant from Ford Motor Company. Its design has been overseen by Simon and engine-builder Doug Yates of Roush Yates Engines, with input from engineer Mose Nowland of Ford Racing. With the exception of a few cylinder head changes through the years, Ford has competed with the same basic V-8 engine package since 1991.

“We’ve gone through the validation process on the plate package, so, at this point, we’re ready to race the FR9 full-time in restrictor plate form,” Simon said. “We’re going through the same process on the open engine. We ran it in the No. 21 car at Texas (with Elliott) and we’ll be running it in the No. 43 car (with Allmendinger) at Darlington, and then at the All-Star Race we’ll have them in all the cars there as well.”

“In the second half of the season, as the validation process gets completed, the FR9 will become the primary race engine for us in the open and plate races,” said Simon, noting that the implementation process is on-schedule. “We’re not frustrated by it because we have a plan and we laid that plan out long ago last year on how to roll the engine out.

“In that respect, we’re really satisfied with the way the FR9 is getting rolled out. At the same time, we know people are anxious for it, so I guess that’s a good thing. People do want to see it out there racing and there’s a lot of money and resources invested in it, so we’re anxious to get it out on the track, too. But we’re on-schedule and not frustrated.”

Kahne, driver of the No. 9 Budweiser Ford, won the second Gatorade Duel at DIS (Daytona International Speedway). That remains Ford’s only visit to Victory Lane in a Cup race during a 2010 season that has seen Chevrolets win five of eight races. Johnson has three of Chevy’s wins in the No. 48 Lowe’s Impala fielded by Hendrick Motorsports.

So Ford is hoping that this new FR9 motor will step up to the plate and get their race teams back into Victory Lane.

Nevertheless, it is time to buckle into your favorite easy chair, pull those belts tight, pull your gloves up over your elbows, and get up on the wheel!

“It is Talladega time”!