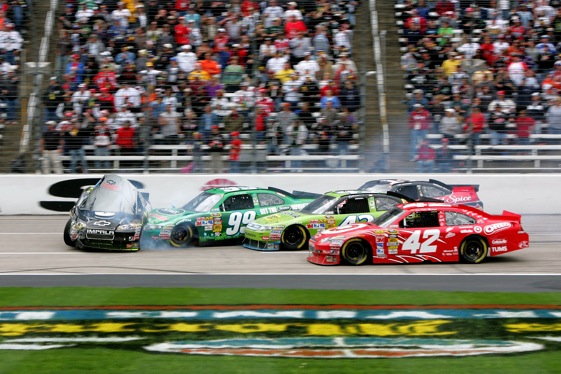 Denny Hamlin took the lead away from Jeff Burton on a restart with 12 laps to go, held off a challenge from Joe Gibbs Racing teammate Kyle Busch with 11 laps to go and then held off Jimmie Johnson to win the rain-delayed Samsung Mobile 500 at Texas Motor Speedway.  Hamlin only led 11 laps of the race.  Fortunately one of those laps was the last lap of the race, which as we all know is the only one that counts!

Hamlin, who had knee surgery following his victory at Martinsville on March 29, beat charging Johnson to the finish line by about .15 seconds.

Then he and the knee that was cut open by surgeons just 19 days before, crawled out of the car and Hamlin said, “We definitely didn’t give up. Just a great day for our race team.”

The beginning of the end started one lap after the restart, which came with 18 laps to go, it was the big wreck. Right in the middle was Gordon. He was clipped from behind by Tony Stewart, who was clipped first by Carl Edwards.  Prior to this crash Jeff Gordon had led 124 laps of the race and was most definitely the dominate race car.  But his day ended with “the big one”.

“I started it,” Stewart said. “Definitely my fault.”

The victory Monday in the rain-delayed Samsung Mobile 500 most likely will help the recovery and rehab on Denny Hamlin’s surgically repaired left knee this week!  Between last week at Phoenix and this past weekend in Texas, Denny Hamlin has let his team know that he is tough and is most definitely a team player!