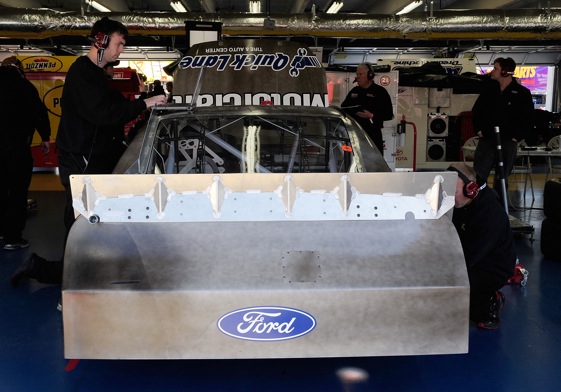 You got to hand it to NASCAR the way that they have re-introduced the spoiler back into Sprint Cup racing.  NASCAR mandated the spoiler to begin operationally at Martinsville, the slowest track on the schedule.  Next was the 1 mile flat Phoenix International Raceway, which is has a little faster car speeds.  This week the trial of the spoiler is ratcheted up a notch at the Texas Motor Speedway, one of the fastest tracks on the circuit.  This week at Texas and next week at Talladega will be the bench mark for the spoiler tests!

Howard Comstock of Dodge Motorsports Engineering said nobody is really sure what to expect on the fast 1.5-mile Texas track.  “This will finally be the test, the real test that is of the NASCAR mandated change to the (rear) deck spoiler from the old wing configuration,’’ Comstock said. “We’ve run the spoiler on the 95 mph Martinsville track, and we’ve run the spoiler on the 130 mph Phoenix track, but none of that will have prepared anybody for the effect we’ll see on the 190 mph Texas Motor Speedway. It will be  interesting”

So far most of the drivers have stated that the car does not drive any differently with the spoiler vs. the wing in the first two races.  However, the increased speed that occurs at Texas may unlock some aerodynamic tendencies that have not been witnessed at the lower speeds thus far.

After the crews unload the race cars and get their first practice session under their belts Friday, those secrets that have been locked away with this race car will be revealed as they crank up the speed at Texas!   With speeds of upwards of 190 MPH there will be some new car characteristics that will have to be dealt with by the crew.

What kind of adjustments will the crew chiefs have to do to keep the race car in balance?  Will the infamous “aero push” re-appear with the higher speeds of Texas?  How will the race car “suck” up to the car in front?  These questions and many more will be answered this weekend at Texas.