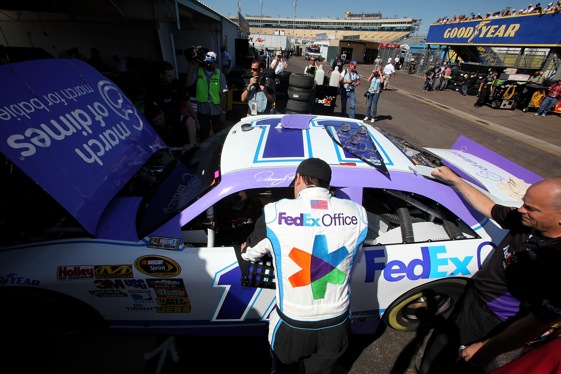 After winning Martinsville, Hamlin headed off to have his knee surgically repaired via an ACL replacement surgery.  In eleven days he was back in the cockpit of his race car.  Just the thought of that seems to be extremely ambitious!  But Hamlin hung in there a raced the entire race, even when the pain increased and the racing luck turned not so great.

After the race, Hamlin, who finished 30th, talked about the knee.

Question: How are you feeling after racing the entire race today?

Hamlin: “We had a lot more issues than my leg today. We had a subpar car and we just killed ourselves trying to change – we had electrical problems. We shouldn’t have had a problem and then when we tried to fix it, we got ourselves behind on pit road and lost two laps. Just fought all day and it was just a miserable experience. To be honest with you, I would have been too embarrassed to give Casey (Mears) the car I had today. It’s not what we’re accustomed to.”

Question: Did you think you were going to finish the race when it started?

Hamlin: “I got a lot of encouragement from the team. Through thick and thin, we’re a team. I feel like they’d give their left leg for me and do everything they could do to make sure we were successful and I felt like it was my duty and my job and that’s what I’m hired to do, is to try to do the best I can and keep this team as good as we can. We had problems on the race track.”

Question: Was there a reason you stayed in the car the entire race?

Hamlin: “I was going to do all I could do. I reached a point, probably 160 laps in I looked at the score board to see how much more time I had to stay in there and that’s about the time we went about two laps down. I knew that if I got out of the car, I was going to hear all kinds of stuff from everyone else saying I gave up on the team. That’s one thing I’m not going to do is give up on these guys. It didn’t matter if I knew we weren’t going to gain one more position today and I knew it once we went two laps down. I felt like it was important for me to be in that car.”

Question: Would you have considered getting out of the car if Mike Ford (crew chief) or Joe Gibbs (team owner) suggested it?

Hamlin: “I would have considered it, but to me I can’t watch somebody else get in there.”

Quesiton: Do you feel better today than yesterday?

Hamlin: “I was on my feet a lot, even during practice (yesterday). I was on my feet for four or five hours even though I wasn’t necessarily in the race car for Friday. Today I was able to stay off of my feet until I got to the race car. That was the most important thing. I didn’t have to strain any energy until I got in that car.”

Please, will someone tell me why people do not think that race car drivers are tough athletes?  Hamlin just proved to his team that they, are in fact, at team!  They win together and they loose together.

That is what a team does!

What is your opinion of Hamlin’s efforts at Phoenix?