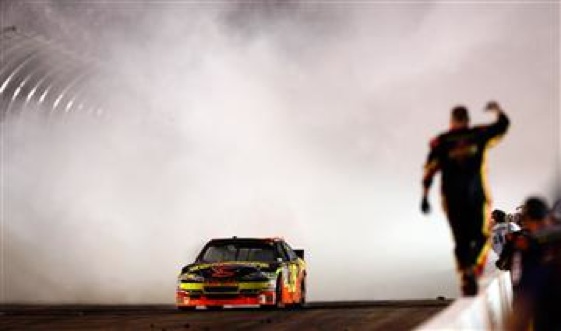 It was Newman’s first victory since he won the Daytona 500 in 2008. It gave him his 14th Cup victory but  first as a driver for Stewart-Haas Racing.

“It’s the most emotional victory I’ve had in my career just because took so long,” Newman said.

Kyle Busch, who led 113 laps and appeared to be headed to his second victory in two nights at PIR as he had a big lead when a caution came out with four laps to go, finished eighth. His undoing appeared to be a decision to take four tires during the final pit stop while most others took just two.

“It was a tough call,” Dave Rogers, Busch’s crew chief said. “Everyone watched the Nationwide race yesterday and we decided before the race that if we’re going to hit pit road late like that, then you should take four (tires). Two tires, the cars are just out of control and the drivers are doing all they can to hang onto them. You saw that out there, but unfortunately, enough took two that somebody benefited from it. It was a tough call.”

On Friday night in the Nationwide race, Kyle Busch dropped into the pits and took four tires in a late yellow flag restart and emerged as the victor.  However that pit strategy didn’t repeat itself Saturday in the Sprint Cup race.  Busch finished in 8th place after dominating the race in the late stages.

So gang, Elton John had it right years ago!

Saturday night is alright for fighting!