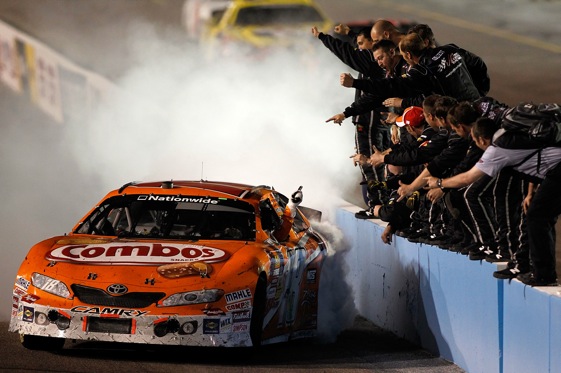 Saturday night in Avondale, AZ it was Kyle Busch who prevailed in a wild shootout with 10 laps to go in the race.  Kyle Busch passed Brad Keselowski for the lead with five laps to go and hung on to win the Bashas’ Supermarkets 300 Nationwide Series race Friday at Phoenix International Raceway.

Throughout the first half of the race, Kyle Busch was the dominate race car with “Blazingly Bad” Brad Keselowski closely on his tail.  But an overzealous restart with 50 laps to go by Kyle Busch that caused NASCAR to issue him a pass through penalty.  After serving the penalty, Busch emerged from pits as the last car on the lead lap. From there, 19th place, he moved forward and finally recaptured a lead he held for much of the evening.

“I knew if we could get a caution that we might have something that we could go after him with,” Busch said of Keselowski. “I didn’t know how far we could come back up. I figured maybe we could get to fifth, maybe fourth but that was about it. A great effort by the team and the guys. Jason (Ratcliff, crew chief) awesome race calls there to get the car a little bit better. It all started back in practice. We made a lot of big changes to it and it seemed to pay off. We were pretty good.”

Jason Ratliff was just as surprised by the race outcome!

“It was interesting,” he said. “We struggled a little bit at this track last year. We came back with a different setup and went through a lot of changes today in practice and were fortunate to put something together. It was good tonight. It looked like it was between us, the #22 (Brad Keselowski), the #20 (Joey Logano) most of the night and we were able to maintain our track position.

“We had a good night on pit road. Then, there about 70 to go or whatever, everything kind of went upside down and we lost our track position. To come back up through there and come back and win the race, it’s exciting, probably more exciting than it would have been if we would have just led the rest of the laps.

Adding to Busch’s pass through penalty was one pit road incident on the last yellow flag of the race.  He clipped the right front of team mate Joey Logano’s race car causing some minor sheet metal damage to Logano’s car.  Although the sheet metal damage was minor in nature, it was enough to disrupt the front end aerodynamics, causing a loss of down force, and thereby creating a push for Logano.  It was enough for the handling characteristics to change for Logano’s race car and relegating him to a 10th place finish.

All in all, the Basha’s Supermarket 300 provided some good story lines as the race progressed through the evening.  And as sometimes the case, the late race antics provided some extra excitement.  Kyle Busch and his aggressive racing style was the headlines at Phoenix International Raceway.  Because  Busch jumped the restart and incurred the pass-through penalty, it was Busch who provided the extra tension and excitement in the closing laps of the Nationwide race Friday evening.