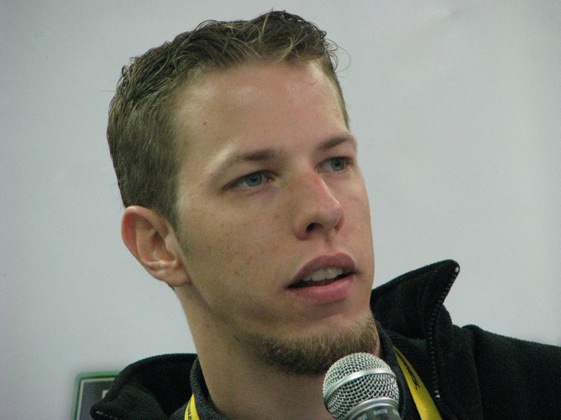 “Blazingly Bad” Brad Keselowski, in only 23 races into his Sprint Cup career, has the fans, the media, and the garage area polarized.  In just those few races, Keselowski seems to have more of the drivers hoping mad with his aggressive and unapologetic driving style.

Keselowski’s response to that idea of angering his fellow drivers was simple.

“I race the way I would want to watch someone race,” said Keselowski, a 26-year-old Michigan native who in his first fulltime Cup season is No. 27 in the standings (No. 2 in the Nationwide Series). “Racing is still fun for me. To keep it fun, I have to do things that entertain myself.

“Generally, what entertains fans, entertains me. I race hard and I like to push things hard. I like to get the most out of myself and the competitors around me.”

Keselowski certainly has built a substantial fan base (twice picked by fans as the Nationwide Series’ Most Popular Driver) with his sometimes no-holds-barred tactics, and no one denies he is a talented race car driver. He won last year at Talladega (Ala.) Superspeedway in only his fifth Cup start, coincidentally the same race in which he and “Cousin Carl” Edwards got together on the final lap. The contact resulted in a horrific crash that sent Edwards skyward into the grandstand fencing.

But en route up the NASCAR ladder from Nationwide and Camping World Truck series starts two years ago, Keselowski has angered some drivers, drawing comparisons in some quarters to Ernie Irvan, Dale Earnhardt and Attila the Hun.

“Yes, I’m very aggressive, but I’m also very passionate,” Keselowski said. “Racing is something I want to honor by giving it 100 percent. My passion and aggressiveness comes from the desire I have to win. I want to produce results for those who have helped me.”

But why did Keselowski choose to go to Penske Racing?

“I felt like it was the right place for me,” Keselowski said. “In a way, I use the analogy of a guy buying stocks that got an inside tip. I see a lot of things happening inside this company that are going to make it very strong over the next few years. A lot of inside things are going on from the personnel and resources. Everything is going in the right direction.”

The direction that “Blazingly Bad” Brad is talking about is obviously winning and championships.  And one of the best ways to achieve such results, Keselowski insists, is to never settle for anything less on the racetrack, no matter whom he rub the wrong way!

The one things that the race fans can be sure of is, Keselowski will drive the wheels off of the race car each and every weekend  for the duration of the Sprint Cup season!  Like him or not he will make the race very interesting.  We most likely will see some of those moves that another young, aggressive, energetic race car driver showed the world,  Have we forgotten that Kyle Busch was and is just as aggressive in his “take no prisoners” racing style?

The question that must be asked:

Is Brad Keselowski as talented as that brazenly arrogant and talented race car driver from Las Vegas, TLVW ( The Las Vegas Weasel), Kyle Busch?  That comparison may be a bit too early and a bit of a stretch, as well.

What is your opinion on “Blazingly Bad” Brad Keselowski?