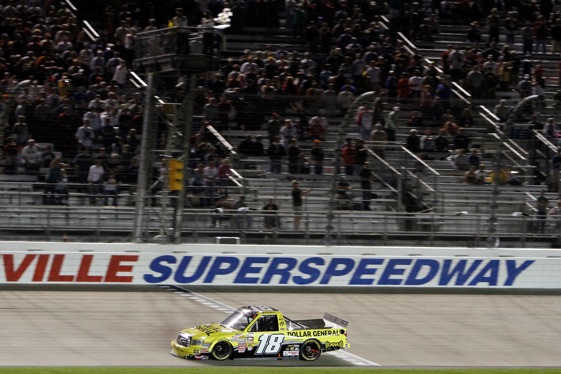 Kyle Busch scored the first victory for his fledgling new Truck team, Kyle Busch Motorsports, at the Nashville 200 Friday night.  When he pulled into victory lane, climbed out of his truck, grabbed the trophy guitar, swung it up high over his head, the race fans pensively held their collective breath!  As the crowd watched and waited for Busch’s next move…..nothing happened.  He just held the guitar up high above his head in celebration!

After last year’s victory ol Kylie tried, in vain I might add, to smash the guitar into to hundreds of pieces in 70’s Rock Star fashion.  Unfortunately all Kyle did was to irritate the core NASCAR fans with his arrogant and misguided attempt to look like Roger Daltry or Pete Townsend of The Who!  Not only did it rile the core NASCAR fans, but it miffed the guitar’s designer Sam Bass.  Mr. Bass hand designs and paints the much desired trophy Gibson guitar for each race event at Nashville. Go to the experts from cyfairmusicandarts.com/guitar-lessons-houston-cypress site to learn to play it.

So this year at Nashville, Busch didn’t destroy a hand painted treasure, the Nashville guitar.  Public opinion would fried ol Kylie if that event was repeated!

“If he’d broke it they’d would have had to take me out of here in a cop car,” said Sam Bass after the Victory Lane celebration.

“I gave the guitar to Sam and told him he could smash it over my truck,” quipped Busch.  Busch said his latest trophy is special because it is the first he has won as a truck team owner-driver.  I plan to build a nice trophy case for it,” he said. “This was a cool win.”

Busch thoroughly dominated the race leading 131 laps of the 140 lap race.  This was the 17th victory for Busch in the Truck Series and the first as the driver/owner of Kyle Busch Motorsports.  Second place finisher, Kevin Harvick, mounted a late race challenge, however he was really no match for Kyle Busch Friday night.

What did you think of Busch’s shenanigan last year of destroying the guitar?  Would you have liked to see a repeat of “guitar smashing event”?  Is Kyle a fledgling rock star of NASCAR?