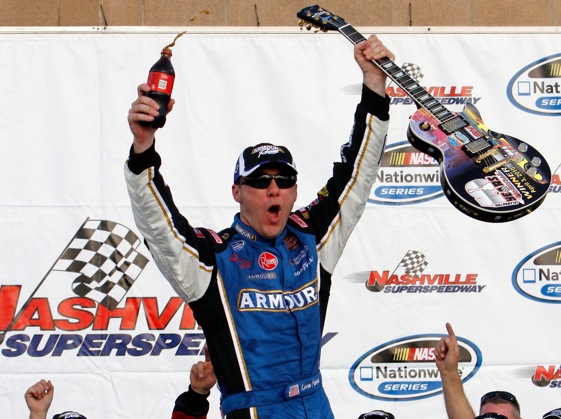 The last time that Kevin Harvick visited Victory Lane at Nashville was four years ago.  So he said that he had some difficulty finding it, because it had been so long since he last drove a car to that part of the garage area!

Saturday evening Harvick led three times for a total of 52 laps in the 225 lap race, known as the Nashville 300.

Asked if the Friday Truck race experience of finishing second to Kyle Busch was of any help?  Harvick’s response was, “It definitely helped”.

When Harvick was presented his guitar for the Nationwide victory, Saturday night, he just held it up in celebration.  That was quite  unlike Kyle Busch’s guitar smashing event in the Truck race a year previous in Nashville!