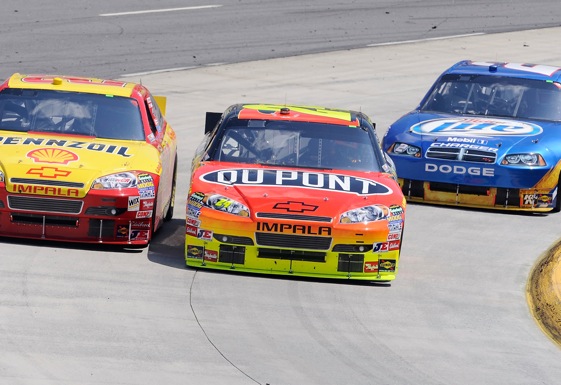 As recently as the 2007 season, he won six times. But checkered flags haven’t come easily for Gordon in a while. His only victory in the past two seasons came last spring at Texas.

It looked like the drought would end on Monday at Martinsville when Joe Gibbs Racing teammates Denny Hamlin and Kyle Busch, running 1-2 late in the race, were brought into the pits during a caution, leaving Gordon in the lead with only a handful of laps remaining on the half-mile track.

Gordon easily stayed out front on the restart, but another yellow flag forced a green-white-checker overtime session.

On the final restart, Matt Kenseth got into the rear of Gordon’s No. 24 Chevrolet with a classic bump-and-run maneuver and zoomed past into the lead. Gordon retaliated, slamming into Kenseth, whose Ford then drifted up the track as the leaders roared past.

But Gordon was done, relegated to third when Hamlin, sporting two fresh tires, and Joey Logano, another Gibbs entry, drove past.

Despite his calm demeanor and smooth words, it was obvious Gordon was not pleased.

“The 17 got into the back of me,” The feisty Gordon said. “I made sure he wasn’t going to win the race after that.”  Gordon wound up finishing 3rd and Kenseth finished a disappointing 18th.

Gordon hasn’t won a Cup title since 2001, goes into the rare off weekend seventh in the season points and still very much among the drivers with a chance to knock his Hendrick Motorsports teammate Jimmie Johnson off the top of the hill that he has held for four straight years.