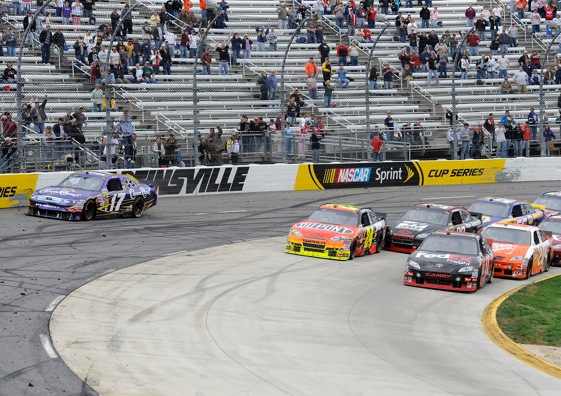 On that final restart, Gordon, who had taken the lead after Hamlin pitted for his tires the caution before, was bumped by Kenseth. Gordon retaliated, Kenseth re-retaliated and amid all that angst Hamlin blew to the lead and he went on to win.

So, there sat Gibbs in the media center. He didn’t even wait to be asked about the call by Ford.

“For Mike and Denny,” Gibbs said, “I told Mike for the record, I never doubted him. But in reality I was cussing him up top the pit box.”

That’s when Gibbs got the laughs.

Workingonmyredneck would  have to agree with Darrell Waltrip, Larry McReynolds, and Jeff Hammond on FOX Monday when they were completely appalled by Mike Ford’s call to bring Denny Hamlin into the pits with about 7 laps remaining in the race for tires!  It appeared that the call to the pits had just erased Hamlin’s chances for a victory at Martinsville.  What a surprise and gutsy call by Mike Ford!

What did you think about that decision by Hamlin’s crew chief, gutsy move or extremely lucky?