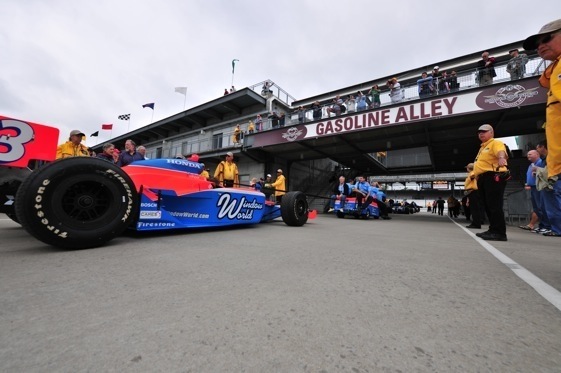 Two of the great families in American auto racing will team up to race in this year’s Indianapolis 500 it was announced Wednesday.

Andretti Autosport of the Indy Racing League, it was revealed, will work in a joint effort with racing legend Richard Petty and Window World, Inc., to field a fifth IZOD IndyCar Series entry for veteran driver John Andretti, first at Kansas Speedway on Saturday, May 1 and then in the 2010 Indianapolis 500 on Sunday, May 30.

“I’m excited to be a part of this venture with John, Andretti Autosport and Window World for the Indy 500,” Petty said. “There is so much history around this event, and the Andretti’s have such a rich tradition in racing. I’m looking forward to watching John hit the track in May.”

After his debut run at Kansas, Andretti will attempt to make his 11th Indianapolis 500 start behind the wheel of the No. 43 Team Window World car. A successful qualifying attempt for Andretti on Saturday, May 22 or Sunday, May 23 will deepen the Andretti family legacy at Indianapolis Motor Speedway as he drives for the team owned by his cousin, Michael.

“It would be difficult to script a scenario any better than the one we have here,” John Andretti said. “The relationship I have with Richard, the respect I have for Michael and his team, the partnership I enjoy with Window World and all of it focused on the Indianapolis 500 – it’s really a perfect situation. I can’t wait to get in the car and get to work. May can’t get here soon enough.”

So the two dominate names in U.S. automobile racing, Petty and Andretti, have joined forces once again to take on “The Greatest Spectacle in Motor Racing”, the Indianapolis 500 in May!