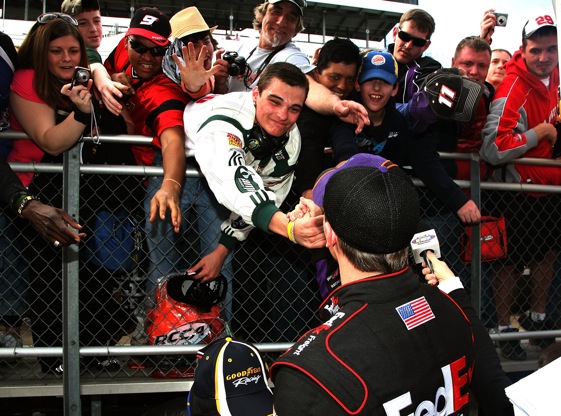 Denny Hamlin captured the win today in the rain postponed Goody’s Fast Pain Relief 500 at Martinsville.  Hamlin won the race after, what was thought of as, a very risky pit stop with only 10 laps remaining in the race.  The Virginia native passed the cars of both Jeff Gordon and Matt Kenseth to take the checkered flag on the first green-white-checkered restart.

Hamlin had led a race high of 171 laps.  But the pit stop that ocurred with just 10 laps remaining put him 9th on the restart.  Jeff Gordon led the field to the green flag on the restart and appeared to be on his way to his first victory of the 2010 season.  That was until there was a yellow flag with just two laps remaining in the race.

When the green flag dropped, Hamlin plowed through the field with a daring move that should have caused another crash.  With just one lap remaining, Kenseth laid “the chrome horn” on the back bumper of Jeff Gordon and knocked him out of the lead.  Gordon returned the favor to Kenseth, all the while allowing Hamlin to maneuver into the lead and take the victory away!  Following Hamlin through the field was his Joe Gibbs Racing team mate, Joey Logano for second place.  Rounding out the top five is Jeff Gordon, Ryan Newman, and Martin Truex, Jr.

The ending of the Goody’s Fast Pain Relief 500 was one of the most exciting races for a short track in recent memory!

So this victory for Denny Hamlin will make his appointment with the surgeon as soon as Wednesday, a little bit more palatable!  He plans to be back in the cockpit in Phoenix in under two weeks.  That may be very optimistic on Hamlin’s part.

What do you think?  Can Hamlin be back in the cockpit in less than two weeks after ACL surgery?

TIL NEXT TIME, I AM STILL WORKING ON MY REDNECK?

One Comment on “Hamlin Pulls Out An Unlikely Win At Martinsville”