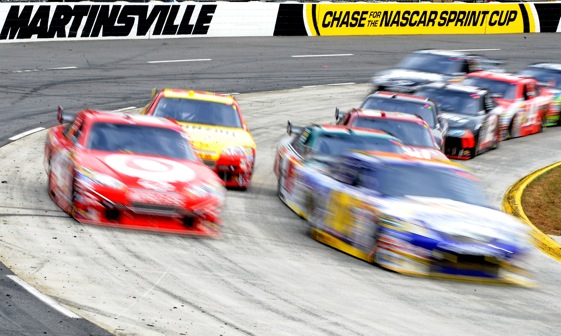 Virtually nobody in the garage today at Martinsville expects that the replacement of the wing with the spoiler will radically transform the quality of racing at Martinsville.  But if you are looking for “cool” looking cars, then the return to the spoiler makes the Sprint Cup car look really cool!

Driver after driver and crew chief after crew chief has said that the switch back to the spoiler makes very little difference in the way the car handles so far.  Martinsville is to small and the speeds are too slow to make that decision.  The real test will be at Phoenix, Texas, and especially Talladega.  Those races are next on the schedule and some of the more technical answers will be forthwith!

Just to reiterate, if you like “cool” looking race cars, then you will love the way the CoT looks now with the return to the rear spoiler!

So this begs the question:

Since both the drivers and crew chiefs have stated that the switch from the rear wing to the rear spoiler hasn’t really changed the way the car handles at Martinsville.  Is NASCAR  sanctioning car races or an auto show?  Are the fans more concerned about how a race car looks or the quality of the races?