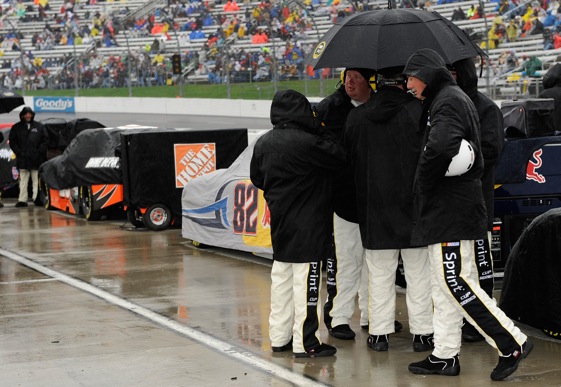 Rain has washed out Sunday’s events in three of the top auto racing events, all venues are in the Eastern Time Zone.  The NASCAR Sprint Cup Series Goody’s Fast Pain Relief 500 at Martinsville has been rescheduled for Monday at 12 noon EDT.  The race will be covered live on Fox.

The Indy Racing League’s Honda Grand Prix of St. Petersburg IndyCar street race in Florida has been rescheduled for 10 am Monday morning aired live on ESPN2.

The NHRA Full Throttle Drag Racing Series 4-Wide Nationals at zMAX Dragway in Concord, N.C. has been rescheduled for 10 am.  ESPN’s continued coverage of the rain delayed NHRA event has been scheduled for 12:30 pm Monday.