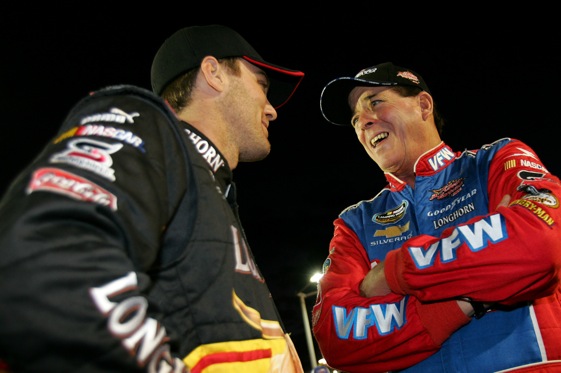 The owner of Kevin Harvick, Inc., Kevin Harvick, won the Camping World Series Truck race at Martinsville Saturday.  That is his second win in a row and Harvick has also won six out the last ten Truck events that he has entered!  Harvick, in his KHI #2 Tide Silverado Chevy Truck, led a race high 187 laps.  A truly dominating Saturday afternoon!

Just as Bristol produces high tempers and bruised egos, likewise is the case for Martinsville, and Saturday was no exception to the rule!

After the race ended, there was some extracurricular activity in the pits.  Johnny Sauter went after Ron Hornaday, who had punted Sauter late in the race to take over second place.  To say that Mr. Sauter was unhappy with Mr. Hornaday would be a gross understatement!