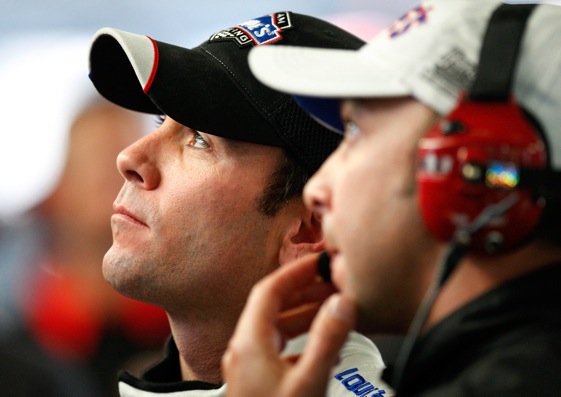 Mission accomplished!  For Chad Knaus it seems that his oft-stated goal of not just winning every mechanical battle, but also prevailing in the psychological war as well, is all but over!  At least that is how it sounded as contender after contender fell out and talked of being “Jimmie-d” again at the Food City 500 at Bristol.

Kurt Busch who led the race best 278 of the 500 laps, seems to have his hands firmly wrapped around the While Flag pole, better known as the surrender flag, after finishing third Sunday!

“We looked at the lap tracker  for Saturday’s practice, saw the 48 was going to be the car to beat,” Busch said. “They are every week.  It’s up to the best of us to knock him off the top.  So it’s rough.  You know, they’ve won three times this year.  Not that we need to deserve to win, it’s just that they are winning every chance they’re given.”

The whole garage watches every little thing that the #48 teams does.  The other 42 competitors track the #48’s practice speeds on Friday and Saturday’s outings, discuss the #48 team’s progress in their own team meetings, and target Johnson and Knaus on Sundays!  All the while they are surrendering small pieces of ground on the psychological battleground.

Do other teams notice that? You bet that they do!  They have just come to believe that those situations are going to happen each week, and it does!  It simply has to affect them.  Thoughts of self-doubt and doom become a self-fulfilling prophecy, and Chad Knaus knows that!!

With 1/6 of the season now behind them, Chad Knaus and Jimmie Johnson has the competition right where they want them in the psychological war……on the run!